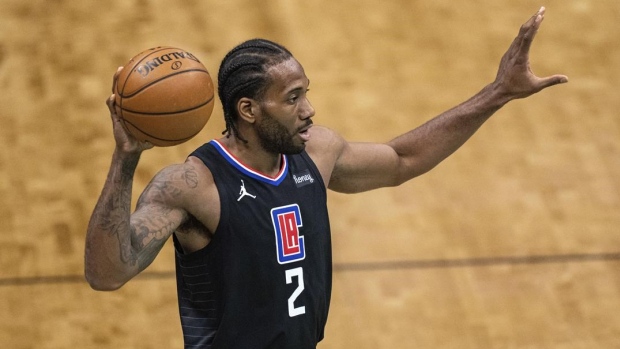 As Gordon Gekko would tell you, “money never sleeps.”

I’m sure most of you are taking a breather after our first full NBA season in three years.

The Warriors literally hoisted the Larry O’Brien Trophy less than 24 hours ago.

But for those of you always out to find an edge or have notes to capitalize on from this season, the Championship and Regular Season MVP odds are already available on FanDuel.

Here’s an early look at the lines for next year. Anything catch your eye?

A closer look at the full list via @FanDuelCanada: pic.twitter.com/DX0IQbsG3A

If we learned anything from this season, the blue-chip juggernaut teams are never a sure thing. The Warriors were the fourth shortest option with the Nets, Lakers and Bucks all under 10:1 odds.

Even though the Clippers failed to make the playoffs this year, they are priced as the second most likely Western Conference team to win it all in 2023.

Let’s break down why.

1) The obvious – The return of Kawhi Leonard

All signs point to the Clippers having a healthy Kawhi and Paul George for their upcoming season. Both are signed up until 2024 with player options for 2025.

With the Finals wrapped, there’s a lot of chatter about Jaylen Brown and Jayson Tatum being the league’s top tandem and it’s warranted.

But just as most forgot about the Warriors post-injuries, it’d be careless to overlook these two.

If they survive a full regular-season, and that if remains a massive question mark, I don’t see how any opposing tandem can outlast them in a seven-game series.

Ahead of this season’s trade deadline, the Clippers made a fleecy move trading for Norman Powell and Robert Covington in exchange for Eric Bledsoe, Justise Winslow, Keon Johnson and a future second-round pick.

Powell gives them an explosive scoring option off the bench and was often their No. 1 playmaker when Leonard and George were both out.

Covington is the switchy all-purpose defender who can keep opponents honest from deep.

The Clippers could afford a better fitting centre or add some point guard depth, but from a pure talent standpoint, they have the assets to grind down any team in the NBA.

Is this team too young to make a legitimate championship run? Absolutely.

Are they a lock to shorten their odds come next April? Most definitely.

Leaning into the Memphis blueprint from this season, the Cavs showed so much promise after proving the two-big lineup combination of Evan Mobley and Jarrett Allen could work.

Darius Garland took a quantum leap in his third NBA season and looks ready to have a jump similar to Ja Morant had this year.

I was all over Cleveland early in the season and particularly loved their mix of veterans with young talent.

Ricky Rubio was quietly a huge part of their success before succumbing to a devastating season-ending injury.

Kevin Love has come to terms with father time but found new life as a scoring threat off the bench.

With another year of experience under their belt and the space to make another impact trade for veteran leadership, I’m confident they quickly outplay their long odds to win it all. 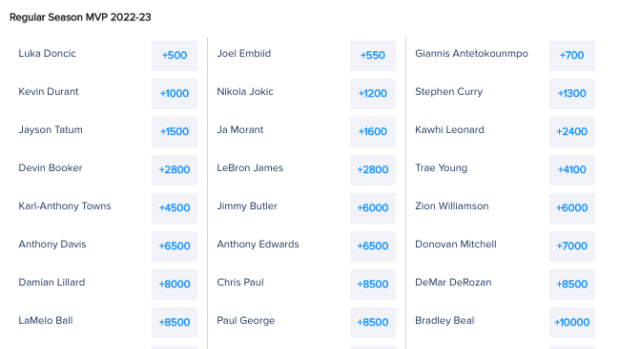 With Nikola Jokic winning MVP this season (in back-to-back fashion), there were a few takeaways I believe we learned:

The Joker had a historically great season, an all-timer by many advanced analytics. But he had the added bonus of carrying the Nuggets on his back without their second and third best players (Jamal Murray and Michael Porter Jr.).

When the Mavericks shipped Kristaps Porzingis out of Dallas, many thought it was a white flag. Shuffle the deck and re-deal.

Instead, we learned over the playoffs that Doncic is such an unstoppable offensive force, the best way to optimize his talent is to unclog the paint and max out his usage rate.

Their recent trade to acquire Christian Wood could end up being an A+ fit. He stretches the floor and gives Dallas an agile big man who could finish off lobs and drop-offs from Doncic.

Luka Magic has opened past NBA seasons near the top of the MVP odds list, but after his playoff performance, I think he justifiably owns the No. 1 spot for 2023.

Talking about narrative, who has more momentum heading into 2022-23 than this guy?

The catalyst for this new age ‘Grit-and-grind’ team, Morant ran away with the Most Improved Player Award and snuck into seventh for MVP voting ahead of veterans like Stephen Curry, LeBron James and Kevin Durant.

The league is going through a generation shift with young stars like Morant taking over.

Of all the rising stars, he’s easily the most explosive and entertaining in game athlete of the bunch.

He opened last season at 55:1 for MVP and helped Memphis jump from ninth in the West two years ago to second last season.

Even if Morant doesn’t take a leap defensively, his team is productive enough on that end to mask his shortcomings.

Considering their youth, expect the Grizz to continue improving. It’s not outrageous to project them for the top Western Conference seed next year.

If that plays out, Morant ends up a finalist at worst.