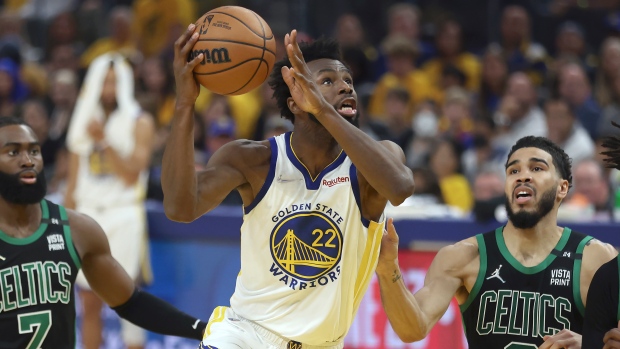 Whether you’ve been a hater or a believer, there’s no denying this NBA Finals has been the apex of Andrew Wiggins’ career Q-Rating chart.

I keep coming back to this tweet from Canadian basketball podcast pioneer, J.E. Skeets, and laugh every time.

Perhaps the most polarizing Canadian NBA player, Wiggins has kept his critics at bay in the most Wiggins of ways.

Everyone is talking about his unheralded impact on the defensive end.

There are two sets of stats I’ll highlight below which translate to the optimal ‘Wiggins Island Same Game Parlay’ if you’re all-in on the former No.1 draft pick.

At the start of the NBA Finals, FanDuel was offering series futures for top scorer, three-point shooter, rebounder, and passer.

Wiggins wasn’t a top contender in any of those categories and opened Game 1 at 55:1 to finish the Finals as the leading rebounder (out of both teams).

After averaging 6.0 rebounds over the first three games, his odds lengthened to 60:1.

Present day, that bet is no longer on the board.

In just two games, Wiggins has leapt into a stratosphere of his own clearing the next closest player by nine rebounds. Jayson Tatum, Robert Williams III, and Kevon Looney are in a three-way tie for second at 38 total rebounds.

As a result, oddsmakers are finally responding to his production after minimal variance in his props all playoffs.

He was as high as 8.5 rebounds for Game 6 before dropping back down to the current 7.5.

Two quick observations on why this rebounding might be sustainable:

Time and time again whether it’s post-game interviews or clips from the game, it’s evident Wiggins is benefitting from being surrounded by winning culture.

His rebounding woes have never been about ability.

Under the brightest lights, surrounded by arguably the league’s best coaching staff, he’s consistently making winning plays on both ends of the court.

With Golden State playing smaller lineups over the past two games, it’s clear Wiggins has been assigned more rebounding duties.

More play time with less competition has been the formula for Maple Jordan’s rebounding.

The other part of his game previously under the radar? The on-ball defence.

Jayson Tatum has had a terrible shooting performance over these first five games and Wiggins has been a major factor.

Look at the comparison below of Tatum’s shooting stats versus his primary defender over these playoffs:

Holding Tatum to the lowest shooting percentage all playoffs is already amazing. Being responsible for just two of his trips to the free-throw line is equally impressive.

Time to give Wiggins his flowers. He’s earned all the praise.

Betting Wiggins to win Finals MVP at +2000 is exuberant. Building a same game parlay on FanDuel with his strengths is a good pivot. If you’re on the Wiggins hype train, here’s a bet to consider for Game 6: