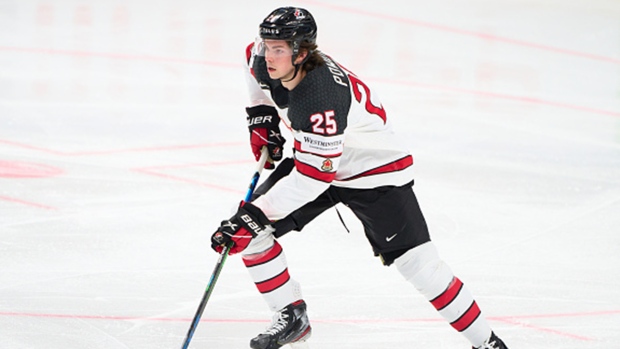 Selection camp for Team Canada is set to get underway from Canada Olympic Park in Calgary on Thursday, with 35 players vying to make the final roster for the 2022 IIHF World Junior Championship.

Headlined by Michigan defenceman and Buffalo Sabres first-overall pick Owen Power, there are 14 NHL first-round picks on the selection camp roster. The leading candidates to be the top picks in the next two NHL entry drafts, Shane Wright (2022) and Connor Bedard (2023), are also in camp.

Quinton Byfield (Los Angeles), Jamie Drysdale (Anaheim), Seth Jarvis (Carolina) and Cole Sillinger (Columbus) are the eligible players currently playing in the NHL, with no confirmation on their status for the tournament.

Here are seven players to watch for Team Canada.

Garand is one of the three goaltenders who have already been chosen to be on the Canadian roster, joining the London Knights’ Brett Brochu and the Edmonton Oil Kings’ Sebastian Cossa.

The New York Rangers’ fourth-round pick is one of three returning players from last year’s team that earned silver. Garand saw only one period of action, replacing Devon Levi in the third period of a 16-2 victory over Germany on Boxing Day.

The 19-year-old is expected to have the inside edge for the starting job in net this time around, with calmness one of the hallmarks of his game.

“I honestly believe watching Dylan play, you don’t know if it’s a practice game, or a practice scrimmage or a gold-medal game, he’s just so calm,” said TSN Director of Scouting Craig Button. “The picture of consistency.”

Guhle is the only returning blueliner for Canada this year and will be a pillar on the back end with expectations that he will serve as captain.

A first-round pick by the Montreal Canadiens in 2020, Guhle was one of the last cuts at Habs’ training camp this year before returning to junior. On Dec. 1, he was dealt in a WHL blockbuster deal, going from the Prince Albert Raiders to the Oil Kings.

At 6-foot-2 and 200 pounds, the Sherwood Park, Alta., native is an imposing force on the blueline with the skating ability to match.

“Guhle is a force of power and will,” said Button. “He’s an exceptional skater. Whether it’s speed, quickness or agility, footwork, he’s just so great with his skates and he uses that skating to great effectiveness.

“He gives away nothing and he takes away as much as he can from an opponent. It’s no day at the beach playing against him.”

Power has the opportunity to make history in Edmonton and Red Deer.

If Power wins a gold medal at the World Juniors, he will become the first player to win a World Junior and World Championship title before playing a game in the NHL.

Now a sophomore, Power’s size at 6-foot-6 makes him easy to spot but it’s his hockey sense that makes him truly stand out as he is set to be a defensive staple and leader for Canada.

“The guy controls the game,” said Button. “He beats you up with his mind. There’s no situation that he can’t handle.

Power’s teammate in Michigan, Johnson brings high-end offensive ability to the table with the potential to make a significant impact for Canada.

“The Magic Man,” Button said of Johnson. “He’s magic. All kinds of tricks off his stick. He’s just so creative, so imaginative. He has so much confidence with the puck on his stick.”

Button believes that Johnson, the fifth-overall pick by the Blue Jackets in 2021, is capable of having a similar impact that Trevor Zegras had for Team USA last year when he led the Americans to gold.

The youngest player in camp is vying to become the first 16-year-old to make the Canadian World Junior roster since Connor McDavid.

In March 2020, Bedard was the first player to be granted exceptional status by Hockey Canada to play in the WHL. As a 15-year-old, he put up 12 goals and 28 points in 15 games, earning him WHL Rookie of the Year honours.

Connor Bedard skates into the Russian zone with speed and pulls the puck to his backhand, and roofs it over Sergei Ivanov to tie the game at one.

He then took his stardom to new heights at the U18s, where he had seven goals and 14 points in seven games to tie him for second in tournament scoring with Shane Wright en route to a gold medal.

“A lot of the time what happens with gifted players is so they’re so used to doing what they’ve always done that when they’re faced with new obstacles, it takes them time to be able to adapt. Not with Connor,” said Button.

The Ontario Hockey League shut down in March 2020 and didn’t resume until this season, so Wright has not played a ton of hockey.

The Burlington, Ont., native, who was the sixth CHL player to be granted exceptional status, didn’t get a chance to follow up on a strong rookie season right away.

What role would 17-year-old Wright have for Canada?

17-year-old Shane Wright is expected to be selected first overall at this year's draft. TSN Director of Scouting Craig Button shares his thoughts on the dynamic forward, and explains what his role could be at the World Juniors.

Earning OHL Rookie of the Year in 2020, Wright didn’t play again until the U18s in April where he captained Canada to gold with nine goals and 14 points in five games.

“We use terms like ‘200-foot player.’ He can play every square inch of the ice,” said Button. “Every meaningful scenario. He can shoot, he can pass, he can use his body to gain advantages. He’s outstanding defensively.”

Wright has since resumed OHL play in Kingston and continues to cement his case as the frontrunner to go No. 1 in the 2022 NHL Draft.

The only player on the Canadian roster who is currently playing professional hockey (with the AHL’s Manitoba Moose) and one of three returning players, Perfetti will be an important piece on and off the ice for this year’s team.

Perfetti had two goals and six points in seven games for Canada at the 2021 World Juniors, and along with Power, won gold at this year’s World Championship with two goals in 10 games.

Since being drafted 10th overall by the Winnipeg Jets at the 2020 NHL Draft, Perfetti has taken his game to the pros and played his first two career NHL games this season.

“He’s got a next-generation processor when it comes to hockey,” said Button. “The mind is two or three steps ahead, it’s fast. He’s got great hands, moves in and out of spaces kind of like stealth-like and then you realize uh-oh we didn’t pay enough attention to him. He’s like the rattlesnake in the grass. You can hear him rattling but by the time you get bit, it’s way too late.”