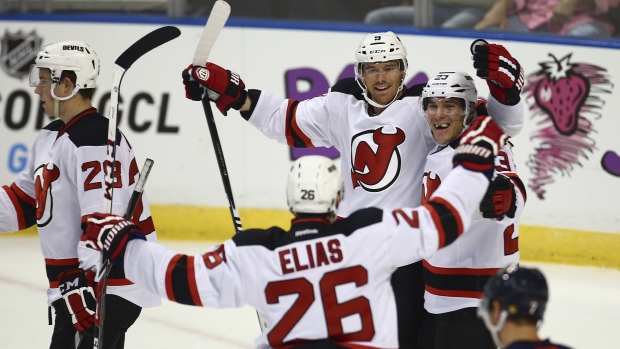 "To get an assist is one thing and I'm very excited about that, but then to get a goal a couple of shifts later when it's kind of still fresh in your mind is just as exciting, if not more," Severson said.

The Devils got points from 11 different players and started their season with two consecutive road wins for the first time after topping the Philadelphia Flyers 6-4 on Thursday night.

"We haven't had many of those games over the last few years," Devils coach Peter DeBoer said. "It was nice. I'm glad for the guys. We worked hard through camp and talked right from day one about trying to get off to a good start here."

Derek MacKenzie scored for Florida, which lost its home opener for the first time in five seasons.

Luongo gave up five goals on 14 shots before leaving the game 2:59 into the second. Al Montoya, the NHL's first Cuban-American — which gives him enormous popularity in South Florida — finished with 10 saves in relief for Florida.

Clowe slid the puck between Luongo's pads from the slot to give the Devils a 5-0 lead, ending the goalie's night.

"It was a tough start but no excuses," Luongo said. He then praised Montoya. "That's what you want him to do in a situation like that, to come in and shut the door. I thought he made some good saves right away."

The Devils took a 1-0 lead on their second shot of the game, with Gelinas scoring on a wrist shot from just inside the blue line and beating Luongo on the glove side. Havlat redirected a shot 6 minutes later for a power-play score, and Marek Zidlicky one-timed a pass from Severson from above the left circle which Cammalleri deflected in for another goal with the man advantage at 13:13.

The win was Schneider's first in four tries facing Luongo.

"I didn't feel too bad for him because it was good for us," Schneider said. "But obviously as a goalie and a friend, it's tough to see. It was one of those nights where I don't think he could have done anything on any of them and the puck just found a way in."

The Panthers, whose special teams were dreadful a year ago, have already allowed five power-play goals this season — including all three in their 3-2 overtime loss at Tampa Bay on Thursday.

"We had a bad start to the hockey game," Panther coach Gerard Gallant said. "It's tough to battle back against a team like New Jersey.We need 18 guys working hard and we didn't have that tonight."

Severson's goal put the Devils ahead 4-0 with 27.8 seconds left in the first. On a power play, MacKenzie redirected a pass from Scottie Upshall with 3:29 left in the second for Florida's goal.

NOTES: The Devils' 11 goals through the first two games of the season matches their record (1991-92). ... The Devils have scored 10 goals in the first four periods of the season. Last season the Devils didn't get their 10th goal until 13:58 of the fifth game.