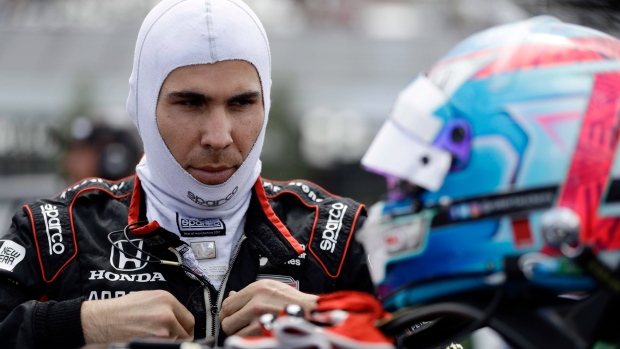 LONG POND, Pa. — His social media post shows a digital image of legs walking in perfect stride superimposed over his own. The emoji, however, hides the delicate steps Robert Wickens takes while clutching the bars of a treadmill.

Wickens returned this week to a full training program after his rehabilitation was stunted by surgery to remove an infected screw in his left leg. His success is counted in muscle twitches, not the blistering speeds of an open-wheel car or podium finishes. The 30-year-old Canadian's Instagram posts are stuffed with smiles and thumbs-ups and videos of seemingly insurmountable exercises .

The surgeries, psychological setbacks and flat-out hard days always lurk for Wickens, who hits the one-year mark this weekend of the horrific wreck at Pocono Raceway . His car shot into a fence, leaving the promising IndyCar driver paralyzed from the waist down. He remains resolute in his mission to race again. He also vows to dance with his fiance at their wedding next month.

"Hopefully we can sway a little bit," Wickens said. "She might have to take the lead. I'll just drag behind her. We'll figure something out."

Wickens has been trying to figure out a life thrown into chaos since the early-lap catastrophe at Pocono last Aug. 19. His biggest triumph came last month at Toronto when he led a ceremonial lap in a $160,000 Acura NSX modified that allowed him to drive with hand controls. The fans at Exhibition Place roared as Wickens, in the car with fiance Karli Woods , took off on his first time on a race track since the accident.

"We're not even one year in of what's going to be a very long recovery, but hopefully I can keep on driving," Wickens said at Toronto. "I think that's the best therapy I can have."

IndyCar drivers return this weekend to Pocono with the driver in their thoughts. There is also the sombre sensibility of racing on a track that has beckoned danger since the series came back to town in 2013. Justin Wilson died in 2015 at 37 from a head injury after being struck by debris from another car.

"Is it something that weighs on your mind? I'm human, yes, it does," IndyCar driver Graham Rahal said. "I think everybody would tell you that. It's hard not to think about those people when you're there. At the end of the day, there is no hesitance. You know that's your job and you go out there to do your best. You have to be safe, you have to be smart and know the balance between risk vs. reward."

The best kind of race at the 2 1/2-mile, tri-oval track where speeds hit 220 mph — in potentially the last IndyCar race at Pocono for the immediate future — is for every driver that starts the race to simply finish without raising the spectre of mayhem and death.

IndyCar has worked on safety measures designed to cut down on the kind of accidents that led to Wilson's death . Next season, a clear "aeroscreen" — anchored by and on a titanium framework — will virtually cover the open-air cockpit.

Its purpose is to protect drivers from debris or other blows to the head — two-time Indianapolis 500 winner Dan Wheldon was killed in 2011 at Las Vegas Motor Speedway when his head hit a post in the fencing.

Some purists cringe at such radical change to the car. Plenty of drivers though have stumped for stauncher safety measures.

"It was the one thing we needed to do," 2018 Indianapolis 500 champion Will Power said. "When you think about the last two deaths in IndyCar, a halo or screen would have prevented that."

IndyCar introduced a 3-inch titanium debris deflector mounted at the front of the cockpit as a temporary solution for this season until Red Bull Advanced Technologies finished its aeroscreen.

"The next big advancement they could make is catchfencing, something where the car slides along it and doesn't get caught in it," Power said.

Wickens raced hard early at Pocono and pushed the thin line of thrilling vs. terrifying when he tried to pass Ryan Hunter-Reay. Their cars slightly touched, and Wickens' car soared into the catchfence . The fencing shredded, and Wickens' car was reduced to just the tub, which came to a rest on the track along an interior wall.

The track repaired about 80 feet of fence and a few damaged posts and engineers made no additional safety requests for the 2019 season.

"With today's technology, the track is probably as safe as it's going to be," Igdalsky said.

Wickens spent most of his career racing touring cars in Europe. He was largely unknown to American race fans when he won the pole in last season's IndyCar opener in St. Petersburg, Florida.

He finished ninth as a rookie in the Indianapolis 500 and reeled off four straight top-five finishes headed into Pocono. Sam Schmidt, the quadriplegic owner of the race team, promised a car for Wickens if he is medically cleared to drive.

Sidelined in a wheelchair, Wickens talks with the conviction of a man who knows that seat will be his one day.

"I need to figure out at what point am I OK to start driving again and almost give up rehabbing," he said.

The timeline for a return, however, doesn't seem close, not when Wickens is strapped into a harness to take his steps or without extraordinary fixes to his nervous system that would defy medical odds.

"Anything is possible with this injury," he said. "I think it's not easy, but hopefully we can keep on keeping on."