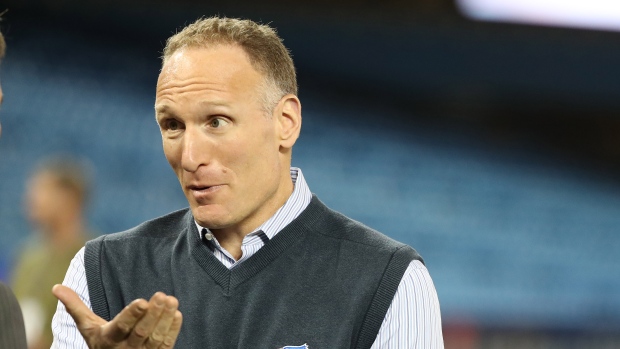 SAN DIEGO — The detractors will say this Toronto Blue Jays’ Mark Shapiro-led regime is too passive, happy with the status quo on the field and focused on the bottom line.

The backers – the few that seem to be left – would call it patient, as roster building, developing talent, and planning for the future in order to put together a sustainable winner takes time in this baseball landscape.

Shapiro, himself, believes his organization is in a great position to strike and add significant talent to a burgeoning young core, but he didn’t exactly put a timeline on when that will happen.

There are “variables” this off-season and different ways things can transpire, the fourth-year president and CEO said Tuesday at the 2019 MLB Winter Meetings in San Diego.

With free agents coming off the board daily, the true intentions of Shapiro’s Blue Jays are being questioned by many around baseball, mostly due to the lack of significant activity showing up on the transaction wire, as well as all the talk about “flexibility” over signalling they’re actually ready to spend money to improve the on-field product.

“There are times that things happen quickly and you identify targets that you aggressively go after and there are times that, like this off-season, where you’ve got multiple players in a similar tier and simultaneously have trade conversations going,” Shapiro said. “My reaction (to the start of this off-season) is the confidence that things are going to happen. I’m not sure when and how, but I’m confident that before we take the field we’re going to have made significant additions to this ballclub.”

The definition of significant is likely to be different for everyone, and it’s also likely the Blue Jays’ definition of it won’t meet the standards of a frustrated fan base.

Whether that’s fair is up for debate, because building a ballclub through free agency isn’t exactly the best way to do things, and timing, as well as the talent available, plays a huge role.

There are definitely ways for the Blue Jays to improve on the field in 2020 without simply going out and throwing Rogers’ cold, hard cash at, in many cases, past-their-prime or late prime free agents, but it has to be a part of the equation at some point.

The Jays are currently hovering around $64 million in payroll for 2020, which includes pre-arbitration players’ projections, as well as $14 million in dead money owed to Troy Tulowitzki, according to Cot’s Baseball Contracts.

“We have the capability to add a lot of payroll from where we are organically with just our internal players, but the understanding, I think, from (GM) Ross (Atkins) and from me is if the right players aren’t there, we’re not going to force it and add just to add,” Shapiro said.

“There are still some variables, there are still some situations that would lead to a payroll being bigger, and there are some variables, if we don’t feel like the right moves are out there, that would lead to the payroll being lower,” he added. “We’re not going to spend it just to spend it but there are certainly opportunities to go beyond last year in the right circumstance, as well. It’s not a static number.”

So, with two months to go until pitchers and catchers report to Dunedin on Feb. 13, what would define a successful off-season?

“I think the expectation and what would define a success is that we supplement and add to the core we have and put us in position to win more games next year and be a better team next year,” Shapiro said.

There’s still an expectation that the Jays will do something this week, maybe after they exit the Manchester Grand Hyatt in San Diego and return home to Toronto. How significant is anybody’s guess.

No one in the organization is content sitting on their hands and doing nothing, and Atkins’ comments earlier this off-season about needing to find impact rather than just depth would suggest moves are coming.

Again, that definition of impact is going to be different for everybody.

“Obviously, there’s a competitive side of you that wants to push to action and push to activity,” Shapiro said. “We’ve had a lot of interesting conversations and have a lot of irons in the fire, a lot of things that we are discussing that feels like something is going to shake loose.

“Certainly, some but not all of the signings (around baseball) have been a little bit surprising. But looking through a big windshield I’m not that surprised. Free agency by nature teams tend to value players differently.”

Some of the players the Blue Jays valued and honed in on early in free agency decided to go elsewhere, whiffing on starting pitchers Jake Odorizzi, Zack Wheeler and Kyle Gibson.

Others, like Gerrit Cole and the now-signed Stephen Strasburg, aren’t options at all and never were.

Hyun-Jin Ryu is a target, but the Blue Jays will have to spend significant dollars and potentially blow past rival clubs’ offers in regards to term, providing an element of risk that this regime has avoided at all costs since the beginning.

Then there’s names like Josh Lindblom, a starter transitioning back to the majors from Korea, and first base options Justin Smoak and Travis Shaw that would maybe improve the ballclub, but roster tinkering isn’t impact.

Technically, they have two months.

But with each passing day, the external doubt surrounding the Jays’ plan seems to grow.

“We need to get better,” Shapiro stated. “We need to add, we need to strike. I think there are different degrees that may not be how you define that or someone else defines that, but we clearly need to add. We can’t just like roll the same club out again as it sits there today.”

Getting away from the obvious need of pitching, pitching and more pitching, Shapiro – along with just about everyone else – sees centre field as a priority.

“We’re all cognizant that we need to figure out what we’re going to do in centre field, whether that’s an internal alternative or whether we do something externally,” he said. “I guess what I would say is a mature, experienced bat to give our lineup a little more protection and to give our lineup a little more stability day to day, and the quality of the at-bat would be something that would help our young players and help us win.”

The outfield is quietly a huge need, as the various Jays roaming the grass last season were one of the worst offensive units in baseball.

Lucrative, team-friendly extensions for pre-arbitration players are all the rage these days, as clubs try to find ways to lock in all-star talent at bargain rates.

The expectation has long been that the Blue Jays will eventually look to do that with Vladimir Guerrero Jr. and Bo Bichette, but the time to stay tuned for those types of announcements is February and March, Shapiro said.

“A lot of conversations internally about all of our zero-to-three players, but as I’ve said before and I’ll say again, we tend to use spring training as the timing to actually conduct those conversations just because we’ve got a limited number of hours and a lot of work to get done in the off-season so right now we’re focused on the more pressing business, which is trying to add players to this core,” Shapiro said.

It takes two to tango and the negative reaction to Acuna’s extension — he likely left tens of millions on the table when all is said and done — might make young players rethink those types of deals in the future.

That’s where the Jays have sat in terms of league-wide attendance over the last five seasons.

The huge drop off in 2019 wasn’t unexpected, however, and Shapiro believes attendance levels will be about the same in 2020.

Shapiro said the “relatively low” season-ticket base is a “challenge” but he also has a simple solution, one that’s likely to work … if they can make it happen.

“I just feel like winning solves everything, and I feel like the momentum’s positive,” Shapiro said. “I felt like it was good by the end of the year last year. I mean, we’ve said it before — there’s pullback in attendance, but we’re pulling back from such enormous levels and such enormous heights. Had we not been, it wouldn’t feel as dramatic.”​