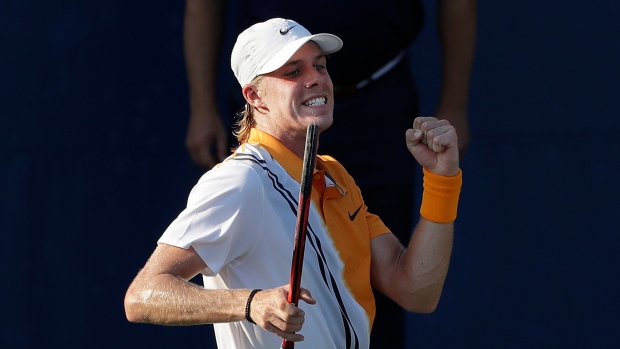 BRATISLAVA, Slovakia — Canada and Slovakia split the opening singles matches of their Davis Cup tie on Friday, setting up a crucial doubles match that will test the talents of young guns Denis Shapovalov and Felix Auger-Aliassime.

Shapovalov gave Canada an early edge with a 6-4, 7-5 win over Filip Horansky. But Martin Klizan downed Auger-Aliassime 7-5, 6-3 to knot the best-of-five, clay-court series at a win apiece.

The young pair will likely be tested when the tie continues Saturday. They are scheduled to combine to take on Filip Polasek and Igor Zelenay in a doubles match, then Shapovalov is pencilled in to take on Klizan and Auger-Aliassime is booked to face Horansky in reverse singles.

The winning team will advance to the Davis Cup finals this November in Madrid.

"Singles and doubles in the same day is not something new," Auger-Aliassime said. "Obviously it's going to be tough for both teams, but we've got to bring our 'A' game."

Team captain Frank Dancevic said no changes to the nominations are expected Saturday.

The 25th-ranked Shapovalov, a 19-year-old from Richmond Hill, Ont., defeated the 219th-ranked Horansky in the first career meeting between the players. Shapovalov broke Horansky twice and saved all three break point chances he faced in a match that took one hour 22 minutes to complete.

"I think the level he played at was top-50 ATP tennis," Shapovalov said of his opponent after the match.

"In terms of the match, I think I served really well and I just tried to keep the pressure on him. I knew eventually in every one of his service games if I just put pressure, then eventually I could get the break."

Auger-Aliassime, an 18-year-old from Montreal ranked 106th in the world, got off to a fast start against Klizan, riding an early break to a 5-2 lead in the first set before losing five straight games to the 38th-ranked Slovak.

Klizan broke Auger-Aliassime three times in the second set, including in the deciding game, to wrap up the match in one hour 36 minutes.

Auger-Aliassime, who made his Davis Cup debut, made 45 unforced errors in the match, compared to 32 for Klizan.

"No one said it was going to be easy," Auger-Aliassime said. "It's tough matches on clay. Physically, it's going to be demanding but I think I'm ready for the challenge."