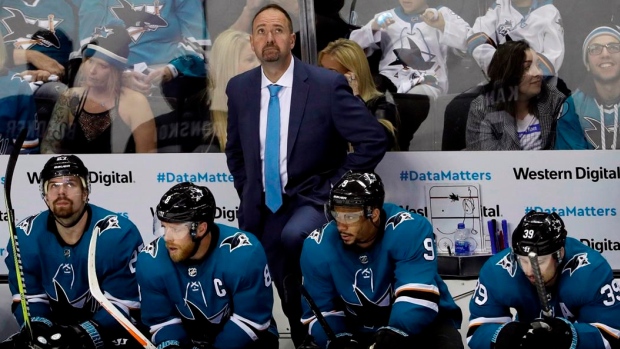 A franchise that perpetually has fallen just short so many times now has the pieces in place to win it all.

"It's a pressure to win. There' s no shirking that, there's no hiding from it," DeBoer said. "I'm not a big believer in you don't talk about the Stanley Cup. There's no hiding from that. That's what we're here to do. I think Doug and ownership have sent a message to our group that they believe we're one of the teams that has the capability of doing that. Now the journey starts and it's on us to get better every day and make sure we give ourselves a chance to win."

The Sharks made the move to acquire Karlsson from Ottawa after striking out in an attempt to sign star centre John Tavares in free agency. It was quite the consolation prize as it gave San Jose the league's top two scoring defencemen over the past decade in Karlsson and Brent Burns, a premier shutdown defenceman in Marc-Edouard Vlasic and a group of talented veteran forwards led by Joe Thornton, captain Joe Pavelski, Logan Couture and last season's big addition Evander Kane.

The addition of Karlsson gives San Jose perhaps the most complete roster in the Pacific Division and the necessary ingredients to make it back to the Stanley Cup Final after being knocked out in the first and second round of the playoffs the past two seasons.

"There's really no excuses," Kane said. "It's up to us to put it all together, put it on the ice, have a good season and like I said, having that focus on not being satisfied with making the playoffs or going deep in the playoffs but winning the Stanley Cup."

Here are some other things to watch with the Sharks this season:

THORNTON'S HEALTH: The Sharks have been hurt the past two seasons by serious knee injuries to Thornton. He played in the playoffs on a torn left ACL in 2017 and then missed the final three months last year with a torn ACL in the other knee. Thornton played at a high level in the final month before the injury last January and the Sharks believe he can still be an impact player at age 39, especially on a line with scorers like Pavelski and Kane.

"To have the luxury of passing to two goal-scorers it's something you enjoy and you look forward to coming to the rink because you know you have two finishers on your line," Thornton said.

POWER OUTAGE: One of the main goals the Sharks had this off-season was improving a power-play unit that ranked 16th in the league last season at 20.6 per cent. The addition of Karlsson should provide a big boost. He is an elite power-play quarterback and his ability to carry the puck into the offensive zone and set up the play should free up Burns more for his big shot. With Thornton, Couture and Pavelski also expected to be on the top unit, the Sharks could get back to the level they were at in 2015-16, when San Jose ranked third on the power play on the way to the Cup final.

TIMO AND TOMAS: While much of the focus in San Jose is on the veteran core, success could depend heavily on two forwards under the age of 25 who showed good promise last year. Tomas Hertl was tied for second on the team with a career-high 22 goals and was dominant at times in the playoffs on the wing alongside Couture. The 21-year-old Timo Meier had 21 goals in his first full season and has the potential to be a 30-goal scorer.

DOWN THE MIDDLE: The trade for Karlsson did leave one hole in the roster at centre on the third and fourth lines. With Chris Tierney in Ottawa, the Sharks will have to decide whether to move Hertl down to the third-line centre role or hope Finnish newcomer Antti Suomela can fill that role. The fourth-line centre could go to a rookie, either Rourke Chartier or Dylan Gambrell.

BETWEEN THE PIPES: Martin Jones was inconsistent last season as he dealt with various injuries, posting a .915 save percentage in the regular season. But Jones once again stepped up his game in the playoffs, where his .926 save percentage in three postseasons for San Jose is the highest of any goalie with at least 15 starts during that span.