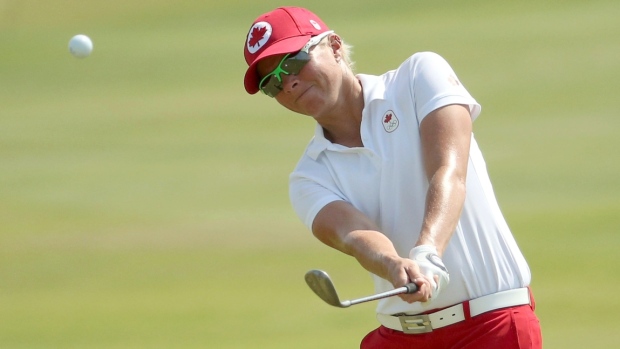 For most athletes, the Olympic Games represent the peak achievement in sports. Just being able to call yourself an Olympian is often the realization of years of training, sacrifice, and competition.

For Alena Sharp, who teed it up for Canada in the Olympics for the second time last summer, the Games experience was the opposite. After finishing 49th, she left Tokyo feeling like a failure.

But this wasn’t about where Sharp was on the leaderboard. This was about where she was in her life. Anxiety over her golf game turned into depression and she spun into some dark places, retreating into herself, and keeping everything bottled up. Her ebullient smile disappeared, and her pleasant demeanour turned sour.

For most of her life, Sharp has been a golfer. It’s how she has defined herself. She has been a junior, amateur, and collegiate player, and now a professional. But when the game that has given her so much pleasure began to cause equal amounts of pain, she wasn’t sure where to go. For the first time in her life, she was lost.

Mental health issues have become more prominent with female athletes in recent years. Naomi Osaka and Simone Biles are high-profile examples, but it stretches wider and deeper than those two stories.

A study done by Dr. Andrew Wolanin, Michael Gross and Dr. Eugene Hong of Kean and Drexel Universities, showed that depression affects 6.7 per cent of the general population but among athletes, it rises to 15 to 21 per cent. For women, the numbers can be even higher. In the British Journal of Sports Medicine, a study showed 30 per cent of surveyed female student-athletes showed signs of depression.

The higher rates were due to risk factors that included performance expectations, overtraining, sports-related injury and involuntary career termination.

That could have been a checklist for Sharp.

Last season was a low point for the veteran Canadian golfer, who struggled to find consistency with her game – especially her putting. In 21 tournaments, she missed the cut 10 times, and her best finish was a tie for 25th.

“I think it started really hitting me when I would practice, practice, practice, and go out and then not perform,” she admitted. “I was trying too hard to perform. And then, when I didn't play well, I felt like a failure or a disappointment. I wanted to quit, and all those kinds of thoughts are in my mind, and then it's hard to get out of that. You go round and round on the hamster wheel thinking those thoughts and you know, one week turns into a month and then a month turns into two months and it's just like I just needed a break.”

Her problems on course largely stemmed from the yips, an inability to make the simplest of putts because her mind wouldn’t stop racing. A two-footer that might be a gimmee on Saturday morning at the club became more difficult than trying to thread a needle blindfolded.

Her worries extended beyond the balky putter. Not only was she having trouble making cuts and earning cheques, but the entire world also knew it. Her results were on display after every round and tournament.

“I think I was just trying so hard to figure it out that it wasn’t as fun for me and then it adds up,” she explained. “You have a few bad events, stress and depression kind of seeps in. Everybody knows your scores and what you're making. All those outside things are out of your control, and they add up and I guess I've always attached how I feel to my golf scores. So, when I wasn't playing well, I just felt pretty down.”

Sharp became her numbers. Shoot 66 and it was a good day. Shoot 76 and the storm clouds formed.

There was another number that didn’t help. At 40, she was the oldest player in the field at many events. She knew her career was nearing an end, that her time was limited, but there was no way of knowing just when that would be. Golf doesn’t have anyone to cut you from the roster or not renew your contract. Instead, your career ebbs away, tournament by tournament, round by round, until you run out of exemptions.

While the Hamilton, Ont., native couldn’t see her own descent into depression, her wife could. Sarah Bowman met Sharp in a pickup hockey game in Arizona seven years ago and began caddying for her not long after.

The two were married in November 2020 in a ceremony that made the front page of the New York Times – it’s not often that a caddie marries a golfer. Soon after, they headed back out to the LPGA Tour but rather than an extended honeymoon, the couple struggled.

“I think most people look at the first year their marriage as extremely blissful,” said Bowman. “And I can honestly say it was the roughest year of our entire relationship. I think there were so many extremely low moments.

“A lot of her anxiety deepened into a depression that was very difficult for her to read. It ultimately also manifested in truthfully, a lot of anger. She certainly pulled away from me quite drastically, the first time I had experienced that in our relationship. So, it was a ton of isolation, a lot of anger, a lot of anxiety. It was pretty dark, and it was a really lonely. It actually became very lonely for both of us.”

Bowman knows all about depression because she’s struggled with it as long as she can remember. She uses medication to help her manage the condition. She also knew that to help her wife, she had to have patience.

“You have to give them the space to discover it and come to those conclusions themselves,” she said. “And that is the hardest thing in the world.”

The dam finally burst when they came home from the Olympics. Sharp was exhausted, burned out and not sure where to turn. She had been seeing a therapist off and on, but most of her troubles remained bottled up. That’s the way she’d learned to handle problems. Keep them inside until they go away.

One morning she sat down on the couch beside Bowman and the two began to talk about why they were struggling, both on and off the course. Bowman suggested she stop caddying and just be a wife. Sharp replied by opening up and admitting she needed help.

“I started crying because it's all I wanted to hear,” said Bowman. “I just wanted her to embrace it, admit it, and she was able to say ‘I’m terrified. I'm terrified of what people will think of me.’”

For Sharp, it was like unlocking a cell door and walking to freedom.

“At the beginning, I was keeping all my feelings in, trying to figure it out on my own,” she said. “And then with the help of my therapist, I had to let Sarah in there because it was just too much for me to handle by myself. She's a great listener and a positive you know, a lot of positive energy and by my side no matter what.”

The golf year didn’t end on a high note. Sharp didn’t retain her status on the LPGA Tour and wasn’t able to get it through the qualifying event in December. Right now, she figures she might be able to get into four events in 2022.

She’ll try her hand at qualifying for individual tournaments not far from her Arizona home. One good finish could get her back on tour, but she doesn’t want to think about that when she’s playing. The pressure to perform is what led her here. Of course, that’s easier said than done when your job relies on a good week.

For now, Sharp’s not worried about that. In fact, she’s rather enjoying her time away from golf. She hasn’t touched a club since coming home from the qualifying school. Instead, she’s hiking with her dogs, spending time with her wife and continuing to feel better.

Sharp also knows she’s not the only golfer on the LPGA Tour battling mental health issues. The game can be frustrating and the life a slog, despite what it may appear.

“It’s definitely more common than anybody really thinks because, on the outside looking in, playing on tour looks glamorous,” she stated. “But it can be a grind. I was lucky that Sarah is with me. I mean, I don't know how it would be if she wasn't – it’s lonely. And the pandemic made it worse the last couple years, not being able to go out to dinner with friends and not being able to stay with people because if you test positive, they're out. So, I think it is a lonely life.”

Sharp revealed the extent of her struggles in an Instagram post in August, openly discussing her difficult times with depression. She did it as a cathartic exercise, once again freeing her emotions and laying bare her struggles. What she wasn’t expecting was for it to become a sounding board for so many others to talk about their struggles, many doing so for the first time, and scores offering words of encouragement.

“I feel like it's almost freeing to get it off your mind and talk about it,” Sharp said. “And then the overwhelming support. It was unbelievable. All the tour players and people that I don't know, writing back. Getting the support, it just makes you stronger.”

It wasn’t the first time she’d opened up about her life. In a 2017 issue of SCOREGolf, she detailed her story of coming out as gay. It wasn’t that people close to her didn’t know about her sexuality, but it was her public announcement. It was liberating and powerful, she said after, and led to a flurry of responses from those in the same situation.

Last June, she penned a story for the LPGA Tour’s website on the first day of Pride Month. “Be true to yourself, whatever your sexual orientation,” Sharp wrote. “Life is too short.”

The LPGA Tour has championed players such as Sharp, who have gone public with social issues, in many cases amplifying the message.

“We’ve always been proud of our athletes when they are comfortable expressing themselves no matter what the situation, because in many ways it lets others know they aren’t alone,” said Heather Daly-Donofrio, the LPGA’s chief tour operations officer.

The organization is aware of the struggles its members face around mental health and has numerous programs available, including access to online therapy.

It also helps rookie players adjust to tour life by grouping them in pods. Each one is connected to a veteran player, an on-site LPGA Tour staff member and a retired player.

“Sometimes the rookies come out here and don’t know anyone,” said Daly-Donofrio, “so this helps ensure they’re not alone.”

There is also a program that helps veteran players adjust to life after the LPGA Tour.

Sharp isn’t ready for that just yet. She believes she has some more quality golf left in her career. Right now, however, swing changes have taken a back seat to life changes.

“I was trying to find out who I was,” Sharp said of her recent journey. “I know that Alena Sharp is not just a golfer. She does golf, but it's like finding out who you really are and loving yourself for who you are as a person as opposed to what I do. That's been a huge awakening for me to realize that.”