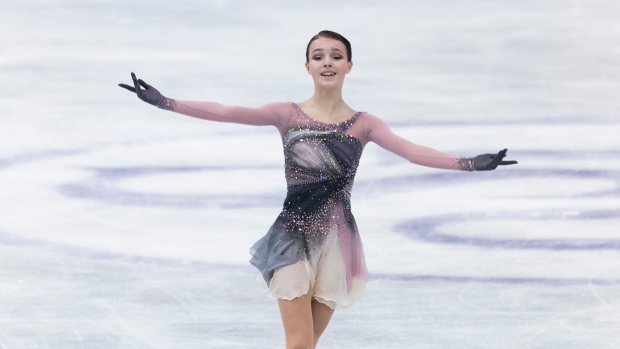 Skating to “Dangerous Affairs” by Inon Zur, the 17-year-old Shcherbakova compiled a score of 77.94.

Japan’s Yuma Kagiyama took a big lead in the men’s short program with a season’s best score of 100.64.

This month at the Italian Grand Prix, Shcherbakova had a disappointing short program but rallied to win gold the next day.

“Today I was nervous, because I skated my new short program for the first time in competition,” the 2021 world champion said. “My coaches decided to change the program. They said the new program will be better for me and that I did not look the way they wanted me to look in the previous program.”

Starr Andrews of the United States was injured during her program and withdrew. The 20-year-old American pulled up while attempting a triple loop.

Skating to Michael Bublé’s “When You’re Smiling” the 18-year-old Kagiyama landed a quad Salchow-triple toeloop, a quad toeloop and a triple Axel.

“There are some things I regret,” Kagiyama said. "But even with mistakes I got 100 points and I think that shows my growth.”

Brown produced a triple flip, triple Lutz-triple toe but touched the ice with his hand on a triple Axel.

“There were things I loved about this program, I loved the fight,” said Brown. “There were a few little errors that I am not so pleased with, but tomorrow is another day."

Aleksandra Boikova and Dmitri Kozlovskii topped the pairs short with a season's best of 77.17 to “Swan Lake." They were ahead of fellow Russians Iuliia Artemeva and Mikhail Nazarychev (73.02). Canada’s Vanessa James and Eric Radford placed third with 71.84 heading into Saturday.

Another season's best saw four-time world champions Gabriella Papadakis and Guillaume Cizeron of France lead the rhythm dance on 89.08 points skating to to “Made to Love” and “U Move, I Move” by John Legend.

“It was nice to be in Grenoble with our French audience and to feel their support," Papadakis said. "We did a very good performance, we are happy with what we did."

It gave them a sizeable lead over Canadian pair Piper Gilles and Paul Poirier (81.35) while Alexandra Stepanova and Ivan Bukin of Russia were third with 79.89.