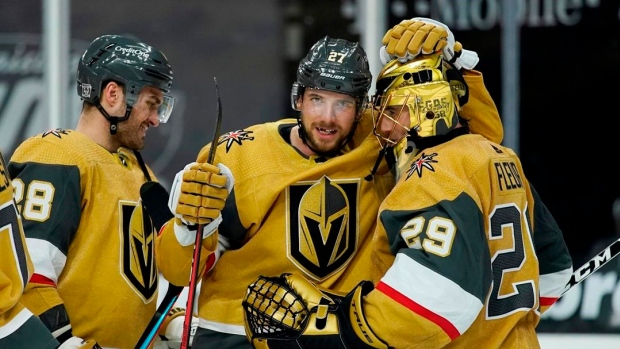 It marks the first time the Golden Knights have started 4-0-0 in their four-year existence. They’re the first team in the NHL to reach four wins this season.

“I think the biggest thing about those games was we got better,” Fleury said. “We’re not going to win them all, but I think if we can keep improving on our game and get better as a team we’ll do well.”

Vegas certainly looked improved from Monday’s scrappy come-from-behind win in the first of four straight games against Arizona, using speed and crisper passes to execute a fluid attack all night. The balanced Golden Knights had 10 skaters with at least one point.

Alex Tuch added a goal and two assists, Mark Stone had a goal and an assist, and Alex Pietrangelo scored his first goal with Vegas.

“I thought our game overall was better than it was the night before,” coach Peter DeBoer said. “The big guys led the way on the scoresheet, but also in our play. Four games in, there’s always work to do, but I liked the things we fixed from the prior game.”

Heading into the game, Golden Knights defencemen had no goals through three games despite taking 37.7% (34 of 90) of the team’s shots on goal.

That scoring drought ended when Theodore fired the team’s first shot on goal past Kuemper with a blistering slap shot from the top of the right circle. Three minutes later it was Pietrangelo, the club’s prize acquisition during the off-season, giving Vegas a 2-0 lead with its third shot on goal.

“We were talking about that before the game — we hadn’t really pitched in too much,” Theodore said. “It’s kind of convenient that we did tonight, and I thought it definitely helped our overall game.”

Pietrangelo and Theodore finished fourth and sixth in last year’s voting for the Norris Trophy, honouring the league’s top defenceman.

Fleury did his part to keep momentum on Vegas’ side with several highlight-reel saves, including stops on Jakob Chychrun and Johan Larsson in the first period, and second-period gems against Phil Kessel and Drake Caggiula to keep Arizona off the board.

Stone made it 3-0 after Nic Hague created a turnover as the Coyotes were exiting the zone. Max Pacioretty gathered the loose puck after Hague poked it loose from Lawson Crouse and tapped it to Stone, who slipped the puck between Kuemper’s skate and the post.

Arizona answered shortly afterward when Schmaltz’s one-timer rang off the post past Fleury.

Theodore got his second goal of the night during a 4-on-4 early in the third period on an odd-man rush after a turnover by Arizona’s Jason Demers in the Coyotes zone. One minute later, Tuch gave Vegas its first power-play goal of the season when he blew past two defenders on the right wing and went five-hole on Kuemper, extending Vegas’ lead to four.

Kessel’s redirect on Chychrun’s drive from the point brought Arizona within three with a little more than 12 minutes left, but that was all the Coyotes could muster against Vegas.

“We got outplayed,” Arizona centre Derick Brassard said. “We all know they’re a big team, they have big bodies, but tonight we didn’t skate enough. We didn’t think the game well.”

Reilly Smith’s helper on Theodore’s second goal was his 100th assist as a member of the Golden Knights.

Larsson is three games shy of 400 for his career, and needs three points to reach 100.

Vegas’ special teams have been hit and miss through four games. While its penalty kill came into the game ranked 10th with an 87.5% success rate, its power-play unit has been another story. After going 1 for 7 on Wednesday, the Golden Knights are 1 for 14 this season.

Vegas’ Ryan Reaves celebrated his 34th birthday by playing for just the fifth time on the day he was born. Prior to Wednesday’s game, Reaves described his perfect birthday.

“I go home, I eat some spaghetti, I take a nap, come bang a couple bodies, hopefully score a goal, go home, have a beer, shut ’er down,” said the affable forward, who finished with three hits and two blocked shots.

The Coyotes and Golden Knights shift their four-game, home-and-home series to Gila River Arena in Glendale, Arizona, for back-to-back games on Friday and Sunday.