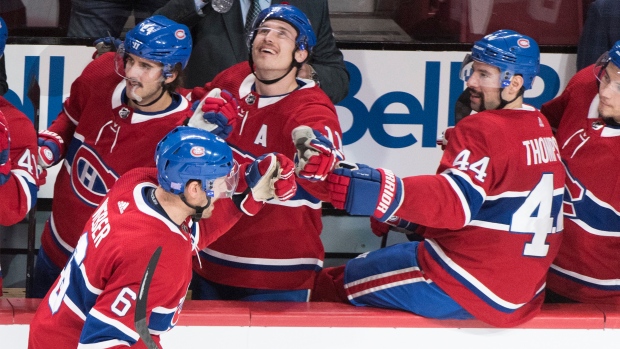 MONTREAL — Defenceman Shea Weber was ready to play as soon as the puck dropped on Saturday.

Weber scored two power-play goals in the first period and forward Nate Thompson added another as the Montreal Canadiens held on to beat the Los Angeles Kings 3-2 on Saturday.

"We know we haven't been good enough here in the last little while," Weber said. "We got to take a look in the mirror and we've all got to be better. I thought tonight we had a much better start and obviously you saw what a start can do."

The victory comes after a 3-2 overtime loss to the Philadelphia Flyers Thursday night, which forced Montreal coach Claude Julien to shake up the lines and defensive pairings before Saturday's game.

The victory was Montreal's fifth in its last seven games, while the Kings have one win in their last eight.

Weber opened the scoring near the midway point of the first period. The captain fired a shot from the top of the face-off circle that hit defenceman Matt Roy. As the puck landed back towards Weber, he blasted the puck past Quick for a goal.

"That was a weird one, definitely," Weber said. "Just waiting for it to come back down. Got lucky on the timing."

Thompson made it 2-0 for the home team 15 seconds later, scoring his first goal of the season and his first goal against his former team. Thompson joined the Habs from the Kings via trade during the 2018-19 season.

"It's just good to get the first one out the way," Thompson said.

Weber would then score his second power-play goal of the period with over three minutes to play.

Kopitar scored his team's first of the night at 2:41 of the second period. It was the Kings' lone power-play goal on three chances on the night. The Kings would draw within one goal with 6:56 left to play in the third thanks to Lizotte's first NHL goal.

"I've been dreaming about that one for a while," Lizotte said. "I've had some good chances (that) haven't gone my way but it really feels good to get that one,"

Quick kept his team in the game with a highlight-reel toe save off of a Tomas Tatar shot.

"It was an incredible save," Kings head coach Todd McLellan said. "Having been out west for my whole career, I've seen that many times."

But the one-goal deficit was as close as the Kings would get.

NOTES: Weber's first goal of the game was his 100th career power-play goal.