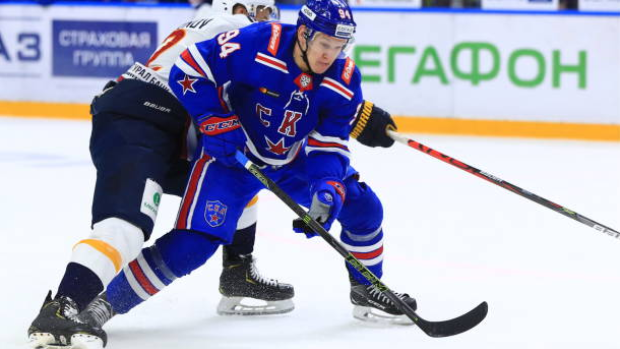 It’s been nearly four weeks since the NHL hit pause in response to the global COVID-19 pandemic, but not a whole lot has changed for Maple Leafs’ head coach Sheldon Keefe.

“I'm doing a lot of bingeing on the Toronto Maple Leafs currently. It’s taking up a lot of my time,” Keefe told reporters during a media conference call on Tuesday. “I've gone through all the same emotions and similar experiences to everyone else, but in many cases, it's been sort of business as usual in the sense that we have projects we're working on every day, working back through video and connecting as a staff.

“We have a responsibility here; our season is not complete. We have to take advantage of every day that we have to look towards being better versions of ourselves whenever we do get back to playing.”

During the 30-minute media session, Keefe dove into several topics, from Toronto landing KHL free agent Alexander Barabanov, to how he’s connecting with players, what went right (and wrong) for the Leafs so far, and why he still doesn’t have a Netflix account.

The Leafs spent two years wooing KHL free agent forward Alexander Barabanov, and on Tuesday the club announced they’d finally succeed in signing him to a one-year, entry-level contract that kicks in for the 2020-21 season.

Barabanov, 25, has been with St. Petersburg SKA for the entirety of his seven-year professional career to date, posting 20 points (11 goals, nine assists) in 43 games during their 2019-20 campaign.

“We're really excited to add another player to the fold here that we think has great experience and a great skill set, and is very high character as well,” Keefe said. “He just checks a lot of the boxes that you're always looking for when you're adding a player that you fully expect to step in and be an important part of your team.”

Keefe credited Jim Paliafito, Toronto’s senior director of player evaluation, for identifying Barabanov’s potential and then laying the groundwork that helped the Leafs win out as his landing spot over other NHL suitors.

“Alex had [other options] available to him and to ultimately settle on Toronto, we're excited to have him,” Keefe said. “We’re still in the mode of the 19-20 season here, but going forward beyond that, we certainly expect he's going to be an important piece of the puzzle for us.”

The Leafs have a recent history of attracting coveted European and Russian free agents, including Nikita Zaitsev, Ilya Mikheyev and Calle Rosen.

In Barabanov’s case, Toronto is confident his history of participation in international hockey tournaments – including winning gold with the Olympic Athletes from Russia in 2018 and earning three bronze medals at World Championships (in 2017 and 2019) and the World Juniors (in 2014) – will allow for a smooth transition to the NHL.

"The KHL is playing a lot more hockey on NHL-size ice, so right away that is something too,” Keefe said. “[Barabanov’s] played a lot both with NHL players and against NHL players in the international competitions. And I've watched him play in some of those games against teams with a heavy NHL presence such as Canada, and you see him succeed there. I think that helps his confidence coming in.”


2. Preparing to be prepared

Since the NHL halted operations on March 12, there have been numerous scenarios floated about what a return to play might look like – whether it will include remaining regular-season contests or jumping straight into playoffs.

With so much speculation already, Keefe didn’t add any more to the pot when asked how long his group would need in a mini training camp before suiting up.

“I don't know that you can pinpoint a particular time [frame]; I think the NHL and the NHLPA will decide on that and whatever the time is, we'll utilize that to the best of our abilities and be prepared,” Keefe said. "That's really what we can focus on, so I wouldn't want to get set on any sort of length of time.”

Mostly, Keefe has been zeroed in on controlling what he himself can control. Toronto entered the pause sitting at third place in the Atlantic Division, and Keefe has been pouring over every detail of the 2019-20 season to see how they got there, identifying ways the team can improve if and when they eventually reconvene.

“The conditions are challenging. Yet, it is an opportunity,” he said. “There’s time to focus on certain things. And the message that we've been giving to our players and to our staff is that there's no excuse. We should come back as better versions of ourselves and maybe in a lot of cases that's going to be difficult to do from a physical standpoint, but there's things that we can do in other areas that, frankly, are more important for our group. So, it gives us a chance to really talk about those types of things and make those sorts of adjustments and make those plans.”

Keefe also pointed out that while his comment calling the Leafs “immature” after a Jan. 18 loss to the Chicago Blackhawks has been repeatedly brought up since, the original meaning behind it has become somewhat distorted, and wasn't indicative of how he views the Leafs as a whole.

“I think there's an important distinction that should be made in that I didn't necessarily say that our team was immature. [I meant] we played immature, and that's two different things,” he said. “You can attach whatever description you want to it but the reality is that we need to take steps, both as a team and individually, and right now when you're not playing, it's a chance for us to reset, but also really identify where we want to go and how we're going to get there.”


3. Staying connected, from a distance

Keefe only took over as Leafs’ head coach in mid-November, and had been working diligently ever since to build relationships with his new players amid the rigours of an NHL campaign.

Now that they’ve scattered, Keefe has had to tap into his electronic communication skills to stay on top of everyone, while also being mindful not to smother anyone with too much contact.

“The obvious challenge is you're not able to sit across from somebody, and talk them through something or show them something,” Keefe said. “But I think we're like everybody, we're adapting to the situation and I am staying in contact with guys directly through phone calls or text messages, emails, those types of things. I was still in the very early goings in my tenure in this job, so I was very much developing those relationships with guys. Obviously, it’s more challenging to do that now, but I do think that there is a balance between forcing things at a time like this, versus letting things kind of play out and having periodic conversations and trying to be respectful of a player's space and their time.”


4. A crazy year gets crazier

While Keefe hasn’t allowed his focus to stray from the Leafs immediate future, he can appreciate what a whirlwind the last six months have been for him personally, from starting the season as head coach of the AHL’s Toronto Marlies, to taking over the Leafs in the midst of a November road trip, and then now being sidelined from coaching entirely during a global health crisis.

“It certainly has been eventful,” Keefe laughed. “My own experience and my own journey, it's been very unique and very exciting on so many levels. [But] going through what we're going through now isn't exciting for anybody. So, I think as we look back on it, we'll remember what we're going through right now more than anything and I think that's really where the perspective and the focus should be. Trying to keep things in perspective as much as I can while recognizing I still have a job to do and I've got to stay focused every day to keep working towards making our group better.”

Over his short time in the NHL ranks, Keefe said he hasn’t learned a whole lot of new things about himself as a coach, but can see where the Leafs have some growing to do.

“The general thing of what I learned is that we have to get better, and the biggest area for us to get better is to be more consistent in both our preparation and our effort,” he said. "While all the other things are important - the structure and how we play and all these things - if we can't play at a high level every single day then it doesn't really matter what we're talking about. We need to give ourselves that opportunity through a foundation of work ethic and competitiveness, and then discipline and structure. All those things that give you a chance to win every day.”

It’s no wonder Keefe has been able to focus on Leafs tape during the pause, considering he’s abstained from joining other popular viewing outlets.

“I actually don't even have a Netflix account,” Keefe admitted. “I don't know if I'm proud or embarrassed about [that], but it seems like a rabbit hole of entertainment that I don't necessarily know that I need to get down.”

Other than watching a few movies he’s had earmarked - including Ford vs. Ferrari and A Beautiful Day in the Neighbourhood - Keefe has stayed pretty much oblivious to what’s riling people up online.

“I’ve been getting a lot of messages and having conversations with different people about the various shows that are the hot topics right now,” he said. “The Tiger King stuff, when I first heard about it, I thought it was going to be a documentary on Tiger Woods, which I thought would have been terrific maybe to catch.”

Instead, Keefe’s hours not spent dissecting hockey have been devoted to family time, and the hope that soon he'll be back doing what he does best.

“I’ve been with my kids and working with them on my skills as a teacher,” Keefe said. “I’ve been able to work with them on the homeschooling type stuff here. My Grade 4 math skills are improving daily. When it really comes down to it, sports is pretty low on the priority list and so many things are more important, [like] family and health. But then I've been getting a lot of messages from people that enjoy their sports [that] also makes you recognize and know that what you're doing is important and that people miss it. When the health officials and the NHL decide it's time for hockey to resume play and it's safe to do so, we'll be excited to get going and entertain people once again.”