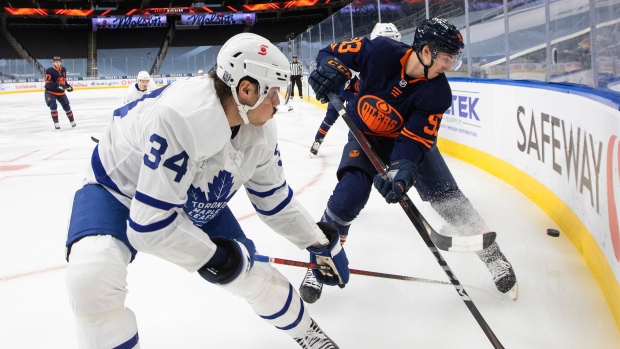 TORONTO — For all the talk about emerging rivalries among North Division opponents this season, the Maple Leafs’ biggest enemy early on has been of their own making, through a landslide of careless penalties that very nearly derailed recent victories.

“Obviously [we’ve been] tempting fate and making it way harder on ourselves than it needed to be, and that's been a bit of a trend for us with these tight games,” head coach Sheldon Keefe told reporters on a Zoom call Friday following the Leafs’ practice in Edmonton. “We take penalties, and give really good, dangerous power plays opportunities. Our penalty kill and goaltending…has stepped up when it really needed to, to allow us to get our two points, but without question, we've got to stay out of the penalty box.”

Toronto was leading the Oilers 2-0 in the second period of Thursday’s game when a pair of penalties to Alex Kerfoot (slashing) and Zach Hyman (tripping) gave Edmonton a 5-on-3 power play that Leon Draisaitl capitalized on late in the frame. It was Draisaitl again on a man advantage chance early in the third period who would score the game-tying goal and put the Leafs back at square one with 14 minutes to play in regulation.

In the end, Toronto still found its way through to a win, topping Edmonton 4-3 and moving to 7-2-0 on the season. But while the Leafs’ boast a league-high 14 points thus far, they’ve also taken the third-most penalties in the NHL (42) and are averaging the sixth-most penalty minutes per game (10:33).

A few of those infractions, specifically the slashing call against Kerfoot on Thursday that looked more like a stick lift, have sent waves of frustration through the Leafs’ bench for appearing incorrect. Keefe’s focus though is on his players not putting themselves in positions where they could get the gate at all.

“Some of them are calls that could go either way, or maybe the ref would want to have them back,” Keefe said. "Over the course of the season, we've had a couple calls that the ref has commented to me that he made a mistake; those kind of things happen. I think those situations usually are a symptom of other things, such as [on Thursday], a couple of slashing penalties probably shouldn't have been called and yet the door is open because they're looking for slashes on the hands and when you're slashing the stick, it can be misinterpreted as on the hand. So just don't do it.”

Keefe has also been bemused by the number of tripping calls against Toronto this season, after the team registered three more on Thursday alone. It’s something he intends to address more closely with the Leafs next week when the club has a string of days off from game action.

“We’ll see if there's anything we can do on that, because if you look at it, a lot of players are doing what we're asking them to,” Keefe explained. “Their stick is down on the ice, they're looking to win pucks. We've taken a lot of penalties this season where we've won the puck, yet the follow through of winning the puck gets into skates and trips people up. So I don't know if that's just happenstance or if it's something that we can bring to the players’ attention.”

One thing the Leafs know they can’t do is simply rely on the penalty kill to always come through. It did late in Thursday’s game, when William Nylander was called for a trip and the Oilers pulled Mikko Koskinen to create a 6-on-4 situation that Toronto managed to shut down. But still, the Leafs’ penalty kill is a middle-of-the-road 16th overall in the NHL at 78.4 per cent and their eight power-play goals against are tied for third-most in the league.

“I thought that against [the Oilers’ top power play], we actually did a pretty good job,” admitted Jimmy Vesey, who averages 1:24 per game on Toronto’s penalty kill. “We were one lucky bounce away from a clear [on Draisaitl’s first goal], but there was a lot of skill on that ice, they had two one-timer options and they scored. But we got it done when it when it mattered. I just think we'd like to be a little bit more consistent and take less penalties.”

The Leafs can put that plan into action immediately on Saturday, when they’ll face Edmonton for the fourth time in 10 days and potentially cap off a week-long road trip in Alberta with a fifth straight win.

And if nothing else, all that time going up against the Oilers’ power play of late has certainly made Toronto aware of dangerous it can be, and how to try slowing it down if needed.

“As a team, we don't want to be in the box as much as we were last night,” said Morgan Rielly. “And obviously moving forward that's an area that we have to clean up in terms of taking those penalties. I think [Connor McDavid and Draisaitl] are extremely important to [Edmonton’s power play] and I think that they are able to create space for one another, their breakout attacks with a lot of speed, and I think we have plenty of tape that our coaches are going to have for us because we're in the box a lot. So we’re going to look at that and just try to be as prepared as much as we can tomorrow night.”​