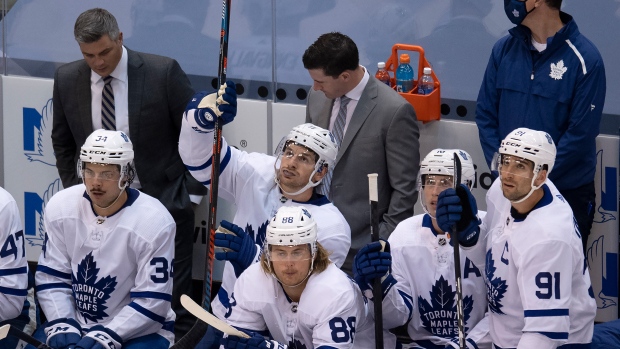 TORONTO — If the Maple Leafs and Columbus Blue Jackets have made anything apparent about their NHL qualifying-round series it’s that, frankly, anything is possible.

“It was crazy that it happened,” agreed Mitch Marner of the Leafs’ late-game heroics on a Zoom call with reporters from the Eastern Conference Hub at the Royal York Hotel on Saturday. “But we believed from the start. It’s a big win. Obviously, what happened in Game 3 was unfortunate for us, we weren't happy with that, but we all talked about how we're happy that we can get right back at it. I think we had the belief in our room and on that bench that we could come back.”

Toronto was down 3-0 and less than four minutes from being eliminated from the postseason on Friday when William Nylander broke through with a 6-on-5 goal to cut the deficit. Less than a minute later, John Tavares scored again 6-on-5, bringing the Leafs to within one.

And then, with 22.2 seconds remaining in regulation, Zach Hyman scored Toronto’s third 6-on-5 goal, sending Game 4 to an overtime frame where Auston Matthews would pot the game-winner on the power play.

It was a startling turn of events for the Leafs, especially after playing like a team defeated for much of that game’s second half. The night before, it had been Toronto in Columbus’ shoes, leading 3-0 midway through the second before giving up four unanswered goals in a 4-3 overtime defeat.

Whatever resiliency the Leafs dug into flipping the script, they’ll need all of it in spades come Sunday.

“[The win] was a huge boost for us, it gives us great positive momentum,” said Sheldon Keefe. “The feeling after the game was tremendous. The amount of joy that I saw from our team was beyond anything that I've seen from us. We have to bring that momentum forward here but recognize that it's a new game [tomorrow], and that the opposition is going to reset themselves and both teams are going to leave it all out there.”

It’s crucial to Keefe that his players heed that message and play accordingly come Sunday. Although he gave the Leafs a day off from the ice on Saturday, Keefe still convened the team at their practice rink for a meeting, to ensure everyone’s focus was sharpened.

“I think what we've come to expect really is that each game, despite [having] some similarities, they've really had their own personalities,” he explained. “The key for us is to ride the momentum into the next game here tomorrow, but recognize that it's a fresh scoreboard. Teams have had time to regroup here, and we've got a start anew.”

In Toronto’s case, that can start with digging into the archives of the series’ earlier games. Prior to Game 3’s implosion, the Leafs executed a solid defensive strategy in their first two outings, with only 17 giveaways combined compared to 29 in Games 3 and 4.

Keefe made it clear after Game 3 he was disappointed with the lack of “plan or purpose” Toronto had to its structure, and the Leafs know winning the series will require an about-face in that category.

“We know that really their chances are coming off the turnovers we're giving them on the odd-man rushes the other way,” Marner said. “For our team, I think we're doing well in our D-zone staying tight, staying five-man and getting out to our point when need be. But I think we can't make ourselves lose; we can't beat ourselves. We got to make sure we're coming out and playing the way we want to.”

And if the Leafs need a refresher on any of that, they don’t have to look far for inspiration.

“We know that we can play a great defensive game when we put our minds to it. We’ve shown it in this series,” Marner insisted. “Just backchecking-wise, and forechecking and not giving them a whole lot coming up the ice. It's something that we have to make sure we have in our minds, that if we play the right way defensively, we're gonna get our chances offensively and I think we just have that belief that we're going to score on one of the chances we do get.”

Without naming names, Keefe said he felt like there are players on his team who have had bad luck in that respect, falling short of what they’ve maybe deserved in terms of production throughout the series. But there’s no time like the present for the luck of those players to turn.

“Even the times when we haven't liked our team game or our structure hasn't been what I expect, I think we've had some individual performances that have been really good and not shown up on the scoresheet,” said Keefe. “But just the effort, and the commitment, that we're seeing from some guys that I think are at a higher level than what we've seen from them before. That’s what we've been asking for. It's such a fine line between winning and losing; that’s just the way it goes.”

If anything, Keefe is banking on the Leafs hard-earned lessons to guide them in Game 5. With a victory, Toronto will advance to the round of 16 and face either the Tampa Bay Lightning or Philadelphia Flyers. Lose, and it’s back to the drawing board, with questions about what could have been.

“What we've been through here, we've seen really good progress in the areas that we really wanted to improve upon as we started [training] camp,” Keefe said. “That's given us a chance to win games and that's very positive for us here so we're going to be looking to bring as much as that as we can here to the final game, and really look to bring the whole thing together.”