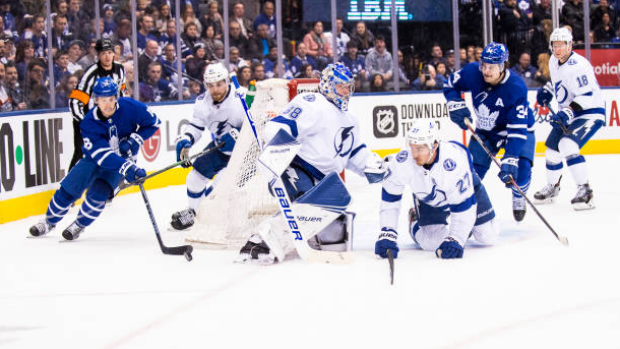 If imitation is the sincerest form of flattery, consider the Maple Leafs smitten with their Atlantic Division rival, the Stanley Cup-champion Tampa Bay Lightning.

Leafs’ general manager Kyle Dubas made that much clear while speaking to attendees at a virtual Coaches Open House in late November, telling the online crowd how he and head coach Sheldon Keefe have a history of admiring Lightning head coach Jon Cooper’s strategic and intermittent use of seven defencemen and 11 forwards.

It’s a format Cooper used frequently while shepherding Tampa to a Stanley Cup victory over Dallas in September, and the Leafs seem intent on seeing if they can use that same 7-11 split to wear down opponents with an enhanced offensive attack.

“I think it does a couple things,” Dubas said of deploying seven defencemen. “Number one, it creates a real difficult matchup up front, because you’re either going to be really running your top three lines a lot or when your fourth line comes back again, you’re going to have a member of the first line back on that fourth line, so it’s going to make it a little more potent. In our case, that’s [adding] Auston Matthews, Mitch Marner, John Tavares and William Nylander [back in]. We think the depth of our D really lends itself to this [as well], and I wouldn’t be surprised to see us use it from time to time during the season.”

It was back in 2016, when Dubas and Keefe were still general manager and head coach, respectively, of the American Hockey League’s Toronto Marlies, that Keefe first picked Cooper’s brain about going with an extra blueliner.

Cooper used the strategy to great effect in 2011-12 while guiding the Norfolk Admirals to a Calder Cup title, and kept it in his coaching repertoire, using it during the Lightning’s run to a Cup Final appearance in 2014-15.

Keefe’s first conversation with Cooper about a 7-11 look came ahead of the Marlies’ Eastern Conference Final in 2016 appearance against Hershey.

"We just probably felt the depth of our defence was better than what we were getting from our forward group,” Dubas said of the 2015-16 Marlies’ squad, “and we called Jon because [Tampa] had been doing [7-11] a lot back then in 2015 when they went to the [Stanley] Cup Final and then in 2016, ’17, and all the way through; they’d never been afraid to do that.”

Knowing full well the $40 million investment in Matthews, Marner, Tavares and Nylander has to be Toronto’s anchor up front, Dubas has focused this off-season on fortifying the Leafs’ blueline.

In the wake of Toronto’s exit from a dismal qualifying-round series loss to Columbus last August, Dubas scooped up free agents T.J. Brodie (four years, $20 million) from Calgary and Zach Bogosian (one year, $1 million) from the Lightning to give the Toronto blueline veteran grit and championship pedigree.

Those newcomers, plus Finnish defenceman Mikko Lehtonen (one year, $925,000), join a stable of established Leafs in Morgan Rielly, Jake Muzzin, Justin Holl, and Travis Dermott, plus young prospects Rasmus Sandin and Timothy Liljegren vying for ice time. The Leafs are open to being creative in how they make the numbers work.

“The group of D has specific functions,” Dubas explained at the Open House, “and I think we’ll have a little bit more of that this year with the addition of Bogosian and Mikko Lehtonen. Lehtonen is a much more purely offensive guy, he thrives on the power play. Bogosian has been an excellent penalty killer in his career and he’s used to this [seven defencemen] system and was deployed that way by Tampa. In the end, it will be Sheldon’s call, but the matchups up front, and then the flexibility it gives you on defence, are certainly intriguing.”

Back to the beginning: Toronto’s early interest in a 7-11 set

Cooper didn’t use the seven-defencemen scheme once during the Lightning’s 2014-15 regular season. But in the run to its eventual Cup Final loss against Chicago, Cooper used the 7-11 look in 14 of 26 postseason games, posting a 9-5 mark. The Lightning was 5-7 in the other 12 games.

That, coupled with Cooper’s previous AHL success in a 7-11 format, was enough to get Keefe on the phone with his fellow bench boss to dissect how a new look might benefit the Marlies. And, for a brief spell, it did.

After speaking to Cooper ahead of the 2016 AHL Eastern Conference Final, Keefe didn’t actually test out the seven-defenceman tactic until the Marlies were facing elimination in Game 4 of their best-of-seven series against Hershey. It paid off with a resounding 5-0 victory.

In particular, it allowed Keefe to use Nylander (then playing in his final AHL season) more often. The AHL doesn’t track individual ice time, but Nylander used the extra time to his advantage, tallying a hat trick that would stand as his only multi-goal performance of the playoffs.

“Part of the reason we went with 11 forwards and 7 D today was to open up a little more opportunity for some of our better players to get more ice time,” Keefe explained after the win on May 27, 2016. “We thought we could spread the minutes around a little bit better with seven and use the different skill sets [our players] have.”

Going back to 7-11 in Game 5 proved less beneficial for Keefe though, and the Marlies were bounced following a 3-2 defeat.

But the seed of that system’s potential was planted in both Keefe and Dubas. Once promoted behind the Leafs bench in Nov. 2019, Keefe tried out a 7-11 system in response to a rash of injuries on Toronto’s blueline. With Morgan Rielly and Jake Muzzin out in late February against Florida, Keefe went for a “team defence” approach by inserting an extra blueliner and saw the Leafs come away with a 5-3 victory.

“With the seventh defenceman, we’re trying to find the right mix and what the mix is going to be and how it’s going to flow,” Keefe said following the win. “When you go with a seventh defenceman like that, you’re just trying to let it evolve. You can’t make too much out of a plan, you just have to see. Once you settle it down, it did help our team.”

Over the years, Toronto has also had good success against the system they are ready to embrace. Since Cooper took over as Tampa’s coach in March 2013, he’s deployed the 7-11 system against Toronto six times, most recently on March 16, 2017, and the Leafs are 5-1 in those contests.

Throughout the 2019-20 regular season, Cooper didn’t have a lot of use for – or success with –  the 7-11 system. He rolled it out in just 12 games, mostly because of injuries in November and December, and posted a 5-6-1 record in those contests.

During the postseason, Cooper maintained a traditional six-defencemen look throughout Tampa’s opening-round series win over Columbus, and in Game 1 of the second round against Boston.

Then Ryan McDonagh got hurt, and Cooper had to make a choice. For Game 2, he was riding with seven blueliners again, using Braydon Coburn and Luke Schenn and scratching Mathieu Joseph; the Lightning beat Columbus 4-3 in overtime.

Bolstered by that success, Cooper used the 7-D system even after McDonagh came back. Over the next 10 games in that 7-11 alignment, the Lightning produced an impressive 8-2-1 record while outscoring opponents 38-23 overall, 28-14 at even strength.

Cooper said he stuck with the 7-D scheme following McDonagh’s return for three simple reasons: it allowed for a defenceman returning from injury to be eased back into the lineup, it kept his other defencemen fresh, and the Lightning were winning.

It also worked because Tampa ­– much like Toronto – has potent offensive pieces who could cycle through more frequently with fewer forwards dressed, ultimately keeping opponents on their toes about who might show up on a given shift.

“It’s about personnel,” Cooper said in September. “It’s about putting guys in the best positions to succeed.”

There are risks too, of course. Like in Game 2 of the Eastern Conference Final against the New York Islanders, when Cooper dressed 11 forwards and then lost both Alex Killorn (to a game misconduct) and Brayden Point (to injury).

The Lightning’s remaining nine forwards helped grind out a 2-1 victory though, and as Cooper noted later “one thing players always want is more ice time, so in a game like that, they were getting what they wanted.”

On the heels of a disappointing loss in Game 1 of the Cup final against Dallas, the Lightning went back to a 6-12 set, with Bogosian and Schenn coming out and Jan Rutta going in.

At the time, Cooper indicated his team was getting healthier, and said they needed more speed and stronger transition games from the defence versus the Stars. Once Tampa earned a 3-2 win to tie the series, Cooper stayed the course with six defencemen all the way to a championship.

“We’ve talked to our guys from the beginning of camp [saying that] it doesn’t take 20 guys to win a Cup; it’s going to take 28,” Cooper said after Game 2. “So many factors go into it. But you need everybody to buy in. Sure, everyone gets disappointed when they don’t get to play. But in the end, everyone is really excited when we win. We’re doing everything we can to put the best team on the ice to win that night and guys understand.”

In the 25 games Tampa played before clinching their Cup victory, Cooper went with a traditional 6-12 set for 14 contests, and a 7-11 set in 11. In that latter bunch of games, the Lightning were able to outscore opponents at a higher rate than with 12 forwards.

The main advantage of a 7-11 system is it emphasizes a team’s top forwards, and that proved beneficial for the Lightning. The point-per-game output from three of their most important scorers increased with one fewer forward in the lineup, while average ice time remained relatively unchanged (but that would also have been influenced by the six extra periods of overtime that Tampa played early in the playoffs).​

That’s the (multi) million-dollar question for Toronto. While most teams (including the Leafs) have inserted extra defencemen into games due to injuries, Tampa has demonstrated it can be a useful tool even with a healthy roster. It’s more about how the change can inspire and elevate different players at different junctures of a season, and gives Keefe a chance to ride guys who are hot.

Plus, as fourth-liner Jason Spezza notes, there’s more than one strategic benefit to feeling secure in various looks.

“I think with the unknowns of [the] COVID-19 pandemic, there may be times you're forced into [using seven defencemen] anyway this season,” Spezza said. “I think one thing with Sheldon is that he's pretty open to anything and he's going to try lots of different things, and I think as players we know that. Those will be his coaching decisions, but if you do try that [7D look] one night, then you maybe start to get used to it and you do get some shifts with guys like Matthews or Marner.”

Until a start date of the 2020-21 NHL campaign is determined, and the Leafs pare down their roster, it’s a guessing game as to how all their pieces will eventually be deployed. But if Dubas has made any message clear in this prolonged off-season, from his free agent signings to his public calls for better team efforts out of Toronto’s core, it’s that there’s a high bar of expectation set for the Leafs this year.

Ironic as it might be, a division rival’s blueprint may be the key to clearing it.