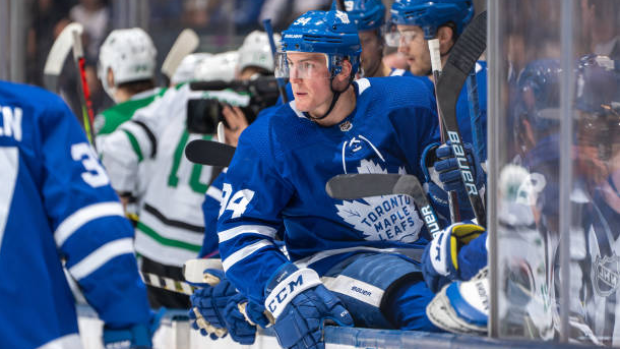 Tyson Barrie spent years waiting for his shot at unrestricted free agency this summer, a time when the Maple Leafs defenceman hoped to be courted by NHL teams desperate for his services.

But while the 2019-20 NHL regular season sits paused amid the COVID-19 pandemic, putting Barrie's plans for the future in unexpected limbo, he's resolved to stay positive about what may lie ahead.

“For sure there's been moments where it seems a little dire,” Barrie told reporters on a conference call Wednesday about the uncertainty surrounding his situation. “You work a long time to get to a point where teams want you. But for me, I’m just keeping it in perspective with what [else] is going on in the world, and [thinking] how fortunate of a position I am to be in. I think it will all sort itself out, it just might be a couple months later [that usual].”

Barrie, 28, is currently in the final season of a four-year, $22 million contract he signed with the Colorado Avalanche in 2016. The Leafs acquired him from Colorado last July along with Alexander Kerfoot, in exchange for Nazem Kadri and Calle Rosen, in an attempt to bolster their flagging blueline.

If this were a normal season, Barrie would either still be in the postseason with Toronto or starting to mull his options around a new landing spot. Instead, Barrie is caught somewhere between the two scenarios, waiting to see what becomes of this campaign before turning the page on a new chapter.

“It's a weird time to be heading into free agency, that's for sure,” he said. “We're still not certain what's going to play out here for the second half of the season and playoffs, and obviously that will extend into free agency. It's an odd time, but at this point I think all I've got to do is focus on getting ready to play, if we are going to play, and try to take a run with the Toronto Maple Leafs in the playoffs. That's why they brought me in and that'd be pretty spectacular, so hopefully we get a chance to do that.”

While that thought rattles around Barrie’s brain, he’s also sorting through the wish list attached to that next contract.

“It's got to be the right fit,” Barrie said of his ideal team. “I think it has to be a spot where they obviously are in need of someone like myself and [they’re] a good team headed in the right direction and a good organization. I think there's a lot of right organizations that tick those boxes, so it'll be a process where you sit down, and we'll just go through everything [that’s] important to me.”

It’s unclear now how much the NHL’s pause will impact next season’s salary cap, whether it can go up at all or stays stagnant, but either way, it’s unlikely the cap-strapped Leafs would have the means to re-sign Barrie. If that's the case, Barrie would leave Toronto after an up-and-down season, with an ending still yet to be definitively written.

After the Leafs made a splash to get him, Barrie had an achingly slow start under former head coach Mike Babcock. Billed as an offensive defenceman who achieved a career-high 59 points in 78 games during the 2018-19 season with Colorado, Barrie notched only seven assists and zero goals in the 23 games before Babcock was fired on Nov. 20.

Barrie found his offensive side with new coach Sheldon Keefe behind the bench, scoring in three straight games after Keefe took over and developing more consistency. Still, the 39 points (five goals, 34 assists) in 70 games Barrie has managed thus far falls well short of his totals the past two seasons, and he felt the weight of not meeting expectations.

“I think it was tough coming into a market like Toronto, where you want to do so well and the fans are expecting a lot and then having a slow start,” he said. “I think [being traded] is a little tougher than I gave it credit for and I'm glad I've had the experience to see that firsthand. It was probably the slowest [start] of my career, so it’s disappointing in that way. But once there was a coaching change, the style of play just maybe fit my game a little better.”

Keefe encouraged Barrie to do what’s come naturally to him throughout a nine-year career, like jumping into the rush and holding onto the puck longer. Keefe also moved Barrie onto the Leafs’ top power-play unit, where he’d thrived in seasons past.

“It was nice to have a coach come and give me the confidence to do [what I do] and help get that confidence back,” Barrie said. "The first couple weeks [under Keefe], we all just seemed like we were having a little more jump to us and a little more offence, so that worked with my game.”

Like everyone else, Barrie is curious now about what a resumption of the NHL season might look like and how the extended time off will affect players. TSN Hockey Insider Pierre LeBrun reported that a 24-team playoff is being discussed between the NHL and the NHLPA, one of several possibilities in the mix for a prospective restart.

“It's not ideal,” Barrie said of the scenarios. “But I think in a time like this, how can anything be super traditional? When you speak about the integrity of it, I think that will be there because it's still going to be the best players in the world playing against each other for the ultimate goal of winning the Stanley Cup. It will certainly be weird, but I think we all have to adapt and be willing to adapt and realize that it's not going to be this perfect, classic NHL playoffs. For the situation that we're in, for one year, I think that's fine.”

If this does end up being the only year Barrie spends in the Leafs’ organization, he’s already discovered something about himself that only a roller-coaster campaign ahead of a huge free agency decision could provide.

"I learned that I can have a really rough patch, but then just stay with what got you there in the first place and stay on your work ethic and your keys,” he said. “I didn't try to change my game, which I'm proud of myself for. I was obviously trying to improve, but was also just being true to what type of player I am and have been. I'm grateful it turned for me.”