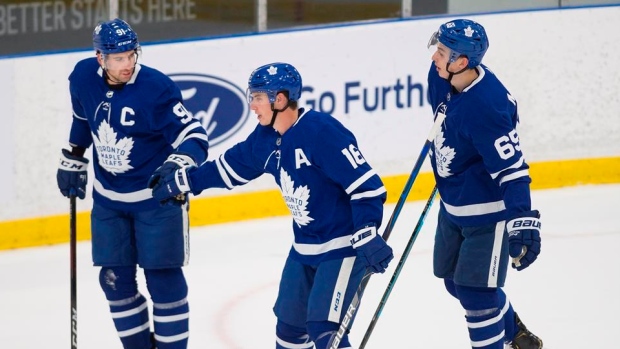 TORONTO — Adhering to the NHL’s stringent COVID-19 protocols while on road trips this season means the Maple Leafs won’t be bonding over restaurant meals or other social outings, so Mitch Marner is spearheading another initiative to help his teammates stay close.

"I was just talking in the room about maybe seeing if we can get a karaoke machine for our team," Marner told reporters on a Zoom call Friday, ahead of the Leafs’ first of two games in two nights against Ottawa. "That might be a little fun thing to do on the road if can't go out anymore – try and just get all the fellas together. We're going to try and talk and get some new things going."

The idea came to Marner after he got a karaoke machine himself for Christmas, and the winger admitted to "singing a lot more now" and wanting to share the experience with other Leafs.

Defenceman Justin Holl, for one, is completely on board.

"I'm a huge proponent of that idea. I love it," he said. "Karaoke so much fun and if we can get a big room where everyone can be at least a little bit involved and feel close to each other that would be ideal."

Although Toronto's players range in age from 19 to 41, Holl thought the overall musical tastes among their ranks might be more similar that you’d expect.

"I saw [veteran Joe Thornton] singing Carpool Karaoke the other day on Instagram with someone," he laughed. "I don't know [when it’s from], but he was singing Britney Spears. So I think no matter what age, we’d [embrace] all genres."

Holl said he’d personally be queuing up "The Man Who Shot Liberty Valance" by Gene Pitney ("It's right in my range, and there's some nice features that go along with the song, a little stage presence,") while Marner’s go-to on the mic is "Dancing on My Own" by Robyn.

One person who decidedly would not be joining in on a team-wide singing contest though is head coach Sheldon Keefe, who Holl thought might do a killer rendition of George Thorogood's "Bad to the Bone."

"I’m not a karaoke guy," Keefe said, adding he had "not a clue" what he would sing if forced.

For everyone else though, that type of distanced social activity would provide a light-hearted distraction while players are mostly stuck inside their hotel rooms, especially during longer stays out west to face North Division rivals in Calgary, Edmonton and Vancouver.

The Leafs are continuing to take every precaution possible to prevent contracting or spreading COVID-19 amongst one another during this first short road trip, with most players even forgoing an opportunity to take a walk outside.

"I think that you are allowed to go and get fresh air, but guys kind of packed it in [last night]," said Holl. "[Everything is] definitely more restrictive. We're wearing masks everywhere. We're in our own hotel rooms. We had assigned seating at the tables when we're eating dinner. We’re trying to do as much as we can and follow protocol as well as we can, so we don't have an issue in terms of an outbreak."

"We're trying to do all the smart and right things to stay healthy," added Marner. "I think the risk is, if one of us do get [COVID], not trying to spread it, trying to be smart with that. So anything we're doing, we're trying to stay a distance from each other and wearing a mask."

As part of that effort to minimize movement this season, the NHL has adopted a baseball-style schedule where teams frequently play each other on successive nights in the same city. Toronto will get its first taste of that on Friday and Saturday, facing an Ottawa team that has not played a game in 309 days.

"We know what they're about," Marner said, pointing to Toronto’s familiarity with Senators head coach D.J. Smith, a former Leafs’ assistant. "It's a lot of hard work, a lot of skating. They added a lot of pieces this summer. I think they're hungry to come out here and play hard, and for us, we know that they're not going to make anything easy. They're going to try and take away a lot of stuff on the rush. They're going to try and dump and chase and get us off our game."

Keefe said he won’t be making any lineup changes for the Leafs on Friday following Wednesday’s win over Montreal. It’s possible he’ll look at adjustments before Saturday’s tilt, including inserting backup goalie Jack Campbell, but Keefe said no one should assume that will always be the case on the second half of a back-to-back.

In fact, this might be the year where Keefe avoids assumptions all together.

"We'll take it a day at a time with everything that we do," Keefe said. "We’ve got no real plans. It's one day at a time all throughout this season."