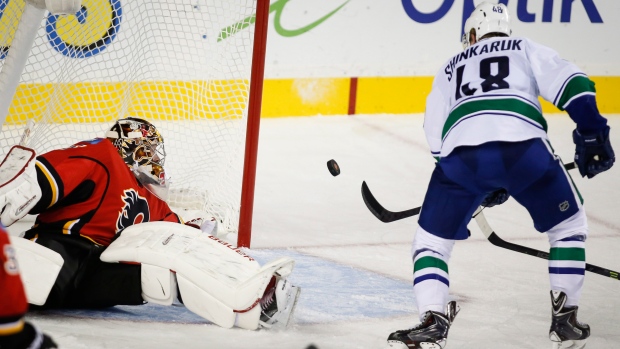 CALGARY - Hunter Shinkaruk is back with the Vancouver Canucks, healthy, and off to a great start this pre-season.

Playing in front of a bunch of friends and family in his hometown, Shinkaruk scored his second goal in as many games on Thursday, helping the Canucks to a 3-1 victory over the Calgary Flames.

Shinkaruk tipped a shot from Kent Huskins on net that was stopped, but he batted the rebound out of mid-air and past Brad Thiessen at the 9:49 mark of the third period.

"It's been really good. Our team has played really well in both of the games I've played. It's been fun," said the 19-year-old, who was selected 24th in the 2013 NHL Draft. "It's always exciting playing hockey, especially for me that I haven't played in a while."

Shinkaruk was one of the final cuts for Vancouver at training camp a year ago. Following that was a disappointing season with the Western Hockey League's Medicine Hat Tigers that was cut short by a hip injury that limited him to just 18 games.

"I feel great. I feel 100 per cent. I feel a lot better than I did last year," Shinkaruk said. "I got a little bit stronger. I feel a little bit quicker. I feel like it's helped me out a lot and I'm definitely happy all the hard work has paid off."

Known as a goal scorer, he knows that's what he has to contribute if he hopes to make the Canucks.

"That's the kind of the role I have to play. I know that, I think everyone else knows that so I put pressure on myself to produce and obviously, scoring in my home town tonight was something that I'll never forget."

Chris Higgins and Nicklas Jensen also scored for Vancouver, which improved to 2-1-0 in exhibition play.

Sean Monahan scored for Calgary, whose pre-season record falls to 2-2-0.

Eddie Lack got the start in net for the Canucks and was perfect on 20 shots before being relieved halfway through the second by Joacim Eriksson. Lack has stopped all 36 shots he's face in his two pre-season appearances.

Jonas Hiller made his second start for the Flames. He faced only 12 shots in two periods of action, stopping 10 of them.

The buzz going into the game was the much anticipated pre-season debut of Sam Bennett, who the Flames selected fourth overall last June in the NHL Draft, making him Calgary's highest draft pick in team history.

Bennett did not disappoint, firing a game-high seven shots on goal in just 16 minutes of ice time. All night he showed glimpses of his raw talent that makes him such an exciting player to watch.

"Tonight, it's very simple, he was our best forward," said Flames coach Bob Hartley. "He was exciting, he was on the puck, he was creating lots of chances. It's only a first game but it's quite a good impression."

Having turned 18 in June, Bennett is young and most are expecting him to return to the Ontario Hockey League's Kingston Frontenacs for another year of major junior hockey. But don't tell Bennett that.

"Whatever management is thinking right now, I'm trying to prove that I am ready. I want them to not be able to send me home," said Bennett, who assisted on the Flames only goal — scored by 2013 sixth overall pick Sean Monahan. "Before, it was all talk. I finally got a game to show everyone what I know I'm capable of doing."

Hartley acknowledges Bennett has a long way to go to make the Flames this year but he was impressed by the first outing.

"Sam is skating as fast — with or without the puck — and there are very few players that can do this. His sense for the puck and how creative he is, it's just unbelievable. He's fast in tight areas like I rarely see with any young players," Hartley said.

Hampered to begin training camp by a strained groin, Bennett finally got to participate in a regular practice with the team on Tuesday. He showed no effects of the injury against the Canucks.

It was a shift early in the second period where Bennett really had the Scotiabank Saddledome crowd on the edge of their seats.

First, he cut in front of the net quickly after looking he was going behind and fooled nearly everyone but could not tuck the puck in the near post. Right after on a shot from the blue-line, Bennett deftly deflected a point shot out of mid-air and on net. Next rush up the ice, he took the puck hard to the net, had his shot stopped, but ended up bulldozing Lack in the process.

"Definitely I was going on that shift. Anytime I touched the puck, I seemed to get a scoring chance. It was just one of those shifts where everything was going my way," Bennett said. "After I got up from running over the goalie, I think I heard (the crowd) cheer a little bit. Definitely that's pretty cool to get the support from the crowd."

Those three shots in less than 30 seconds gave Bennett five on the game and at the time, that was more than the Vancouver Canucks team had.

Notes: Bennett opened the game centring veteran David Jones and rookie Michael Ferland but Hartley mixed up his lines over much of the second and third period... The only area where Bennett struggled was at the face-off dot, going 4-11... The two teams meet again Friday night in Vancouver... Calgary still has 58 players in camp so expect a bunch of cuts in the very near future.