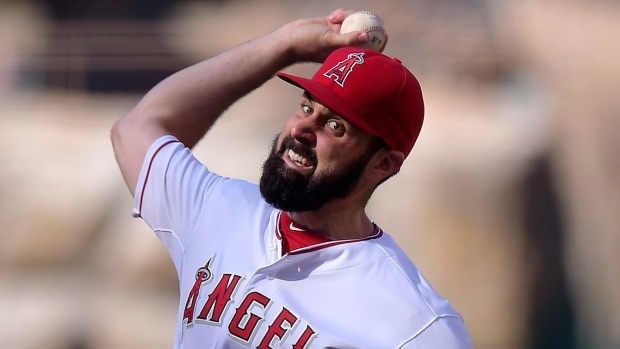 ANAHEIM, Calif. - Matt Shoemaker is off to a successful start in the major leagues. Just ask a select group of baseball's best pitchers.

The rookie right-hander won his fifth straight decision, C.J. Cron and Kole Calhoun homered in the second inning against Yu Darvish, and the Los Angeles Angels completed a three-game sweep of the Texas Rangers with a 5-2 victory on Sunday night.

Darvish is the latest in a group of top-of-the-rotation pitchers that Shoemaker has opposed this season, including Cliff Lee, David Price, James Shields and Chris Sale. The 27-year-old Shoemaker is 3-0 in those starts with a 2.83 ERA.

"It's definitely something I'll savour," he said. "As a pitcher, your focus is huge, so I think that can definitely help a little bit more. I mean, it doesn't really come into play for me — but in the aftermath, it's pretty cool. Those guys have done a lot for this game, and hopefully I can be in their shoes one day down the road."

Cron went deep for the third straight game, helping the Angels pull within five games of AL West-leading Oakland. Calhoun was credited with the first run of the game on a replay reversal in the first inning that led to the ejection of Texas manager Ron Washington by plate umpire Bill Miller.

Shoemaker (5-1) allowed a run and eight hits in 7 2-3 innings with six strikeouts and two walks. The only run against him came in the sixth, when his attempted pickoff throw to first hit Elvis Andrus and rolled away from Cron, allowing Leonys Martin to score.

Joe Smith allowed Brad Snyder's two-out homer in the ninth before Chris Gimenez grounded out to end the game. Snyder entered in the fourth after first baseman Donnie Murphy left because of soreness in his left knee.

Darvish (7-4) allowed five runs and five hits through six innings, striking out nine and issuing four walks — three of them to No. 7 hitter Hank Conger.

This was the fourth time in 75 major league starts that Darvish allowed two homers in one inning — and the third time against the Angels. He came in 7-1 with a 3.82 ERA in 11 starts against the Halos, including six straight victories.

The injury-decimated Rangers remain a season-worst 11 1/2 games behind Oakland after losing for the fifth straight time and 10th time in their last 14.

The play that resulted in Washington's second ejection of the season began when Martin charged Albert Pujols' hit-and-run single to centre field, and then missed the cutoff man as the ball sailed into foul territory between third base and home.

Darvish alertly backed up the play and threw to Gimenez for the tag on Calhoun, who tried to score all the way from first. But Gimenez took the throw while standing in front of the dish, leaving Calhoun no clear path. And according to the new rules instituted this season by Major League Baseball to cut down on collisions, that was a violation.

So when Angels manager Mike Scioscia came out to challenge Miller's original ruling, the replay was checked and Calhoun was declared safe. Gimenez was charged with an error.

"I saw Darvish up the line and I knew he had to make a tough play," Calhoun said. "To his credit, he put it right on the money and I didn't have anywhere to slide. I couldn't go inside or outside because there was no lane, which the catcher is supposed to give now due to this new rule. So I slid right into him. You hope you make that contact and put it in their hands and make them overturn it. And they made the right call."

Washington, who lost Alex Rios and Michael Choice to ejections in Saturday night's extra-inning loss for arguing balls and strikes with umpire Vic Carapazza, came out of the dugout yelling at Miller — who motioned to him that he wasn't allowed to argue a replay reversal. But the argument continued, and Washington was tossed.

"What got me thrown out was the call that was made out of New York," Washington said. "You're not supposed to come out and question that, but you can't stop instincts of the game from happening. And to me, that was an instinctive play. There were no intentions of blocking the plate. The ball took him there."

NOTES: Shoemaker's only loss came in relief against the New York Mets, when he gave up a home run to Anthony Recker in the 13th inning on April 12 at Angel Stadium. ... Darvish has allowed just three first-inning runs in his 14 starts this season. The other two also were by the Angels, on home runs by Aybar and Pujols on May 4 at the "Big A" in his 14-3 victory. ... INF Howie Kendrick, whose RBI double off Jason Frasor in the 10th inning Saturday gave the Angels a 3-2 win, got the day off. He is 0 for 19 against Darvish with seven strikeouts. ... Rangers closer Joakim Soria hasn't pitched since his last save on June 14. There's nothing physically wrong with him. It's just that the Rangers have lost six of seven since then, and the lone victory was by a 14-8 score.