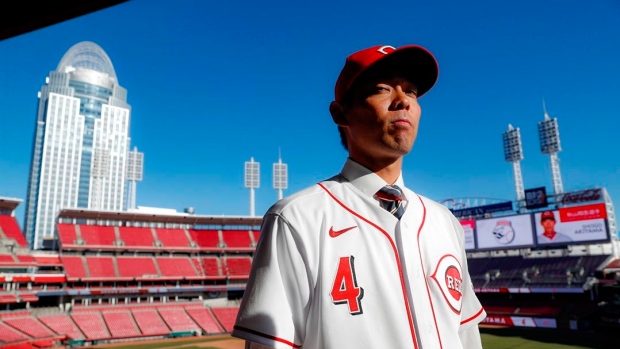 GOODYEAR, Ariz. — Shogo Akiyama got into the batter's box and took his first swing with the Cincinnati Reds at spring training. He barely made contact.

Cincinnati signed Akiyama to a $21 million, three-year deal as part of its expensive off-season makeover. Akiyama, 31, became a free agent after his ninth season with the Seibu Lions in Japan's Pacific League, where he was a five-time All-Star.

The centre fielder could move to one of the corner spots in the Reds' unsettled outfield. Manager David Bell envisions him playing often and hitting near the top of the order.

Cincinnati has lacked a dependable leadoff hitter. Akiyama is known for making contact and getting on base. He had 56 triples and 251 doubles with the Lions.

Cincinnati had been the only team in the majors that had not signed a player from Japan. Akiyama feels a responsibility to do well as the breakthrough player.

“I wanted my teammates to remember my name because I'm the first Japanese player," he said Thursday.

For now, it's about getting accustomed to a new country, a new league and a new team. He doesn't know any of his new teammates very well yet. He met third baseman Eugenio Suarez when he was part of a group that toured Japan after the 2017 season.

“It's great to find him here,” Akiyama said.

Akiyama was among players reporting early for spring training. Reds players have physicals on Friday and the first workout of pitchers and catchers a day later. The rest of the roster is required to report next week.

Akiyama introduced himself to teammates and headed for the batting cage, where the results were less than he'd hoped. In the new setting, he struggled to hit the ball sharply.

“I was still dragging, but I will try to get a little more practice," he said. "It was the worst start that could happen. It can only get better from here.”

Bell will have to figure out how to use Akiyama.

Cincinnati also signed outfielder Nick Castellanos, infielder Mike Moustakas, left-handed starter Wade Miley and reliever Pedro Strop in the off-season, committing $165 million an an effort to become a contender again. Akiyama could give the offence the boost it needs at the top of the order.

"I got to meet Shogo and his family,” Bell said Thursday. “I can't wait to see him on the field. He is exciting to have.”