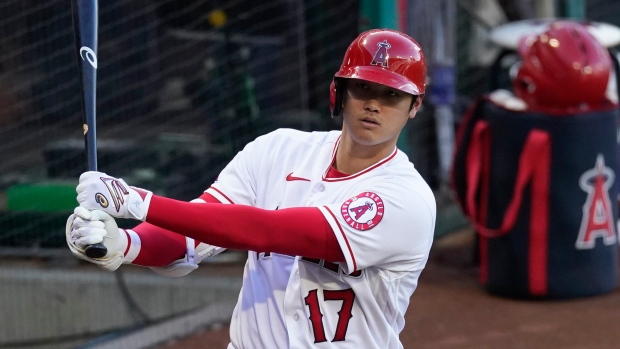 The Los Angeles Angels star will be the first Japanese-born player in the derby, held the night before the All-Star Game.

“I always wanted to see a Japanese player participate in the derby and it happens to be me, so it's really exciting for me,” he said through a translator on Friday.

Some players have gone into slumps after hitting in the derby, finding their swings get out of whack.

“Obviously, I've never experienced this, so I can't really tell you how it's going to effect me in the second half of the season, so I'm just going to just do it and see how it goes,” he said.

The 26-year-old outfielder, designated hitter and pitcher has 19 home runs, three behind major league leaders Fernando Tatis Jr. of San Diego and Vladimir Guerrero Jr. of Toronto. Ohtani is hitting .270 with 47 RBIs, and he is 3-1 with a 2.70 ERA in 10 starts.

Ohtani won Japan's home run derby in 2016, when he also was MVP of the second of Japan's two All-Star Games.

“I was just trying to swing at the ball too hard, like harder than normal, so this time around I'll try to use that experience and just try to take normal BP hacks,” he said.

Ohtani played two games in the thin air at Coors Field in 2018 and went 1 for 2 with a single.

“Everyone told me that the ball flies there, and I felt that when I was taking BP, so it was a lot of fun,” he said.

Anderson and Guerrero won the competition, and Joyner was a co-winner.