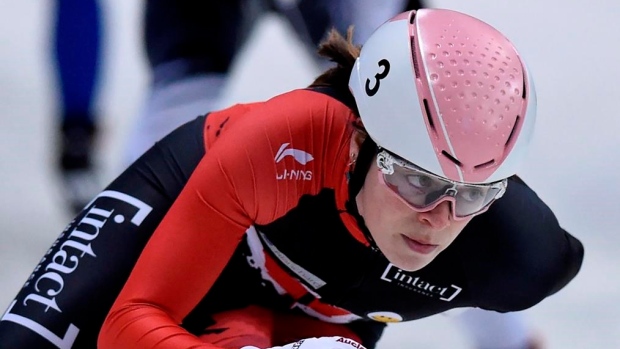 DORDRECHT, Netherlands — Canadian short-track speedskating star Kim Boutin added a pair of silver medals to her haul at this week's World Cup stop, while Charles Hamelin picked up a silver in the last race of his World Cup career.

Boutin, from Sherbrooke, Que., won silver in the women's 1,000-metres on Sunday and helped Canada's women's 3,000-metre relay team to a second-place finish.

"All season we have seen the Dutch dominated in the relay. We’re at a point where we wanted the gold medal so badly that we are a little angry with our result," Boutin said. "We had a really good race, but I think we still need to fine-tune the timing of our exchanges and our relay order. That will be the focus for us in the coming months."

She leaves the World Cup stop with three medals after taking gold in Saturday's women's 500 metres.

“It was a really fun weekend. I was sharp in everything I did. My races have given me confidence and shown me what I can do, even at my age," said Hamelin, 37.

"I am still able to compete with anyone and I can win any race. I didn't necessarily get the results I wanted in some of my races, but that's not what matters. It’s to be my best at the (Olympics) in a few months."

Boutin finished the 1,000-metre race in one minute 28.51 seconds, ahead of World Cup leader Suzanne Schulting of the Netherlands.