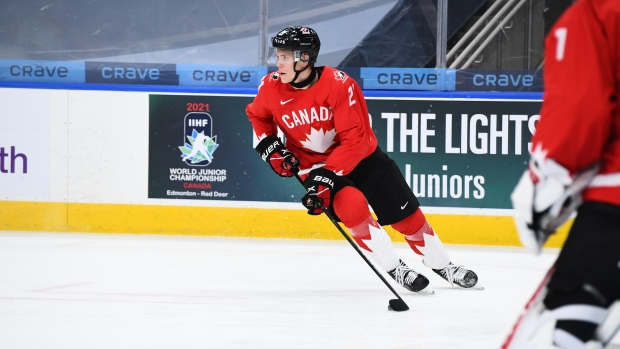 At the end of Monday's practice, the players were called over to the bench and a television was wheeled out. Pittsburgh Penguins captain Sidney Crosby appeared on the screen and, in a pre-recorded message, announced that defenceman Kaiden Guhle will be the team's captain at the World Juniors.

"It's pretty special," said Guhle, a Montreal Canadiens prospect. "Hearing it from him is something you don't see every day. It's pretty cool."

"It's a huge honour," said Perfetti, a Winnipeg Jets’ prospect, "especially to have a guy like that, captain Canada, making the announcement. It kind of gives you chills. I remember watching him when I was three and four years old at the World Juniors and then at the Olympics. He's been the leader the entire way and the leader of Hockey Canada, so for him to give the announcement and break the news to us, it was super cool and something I'll never forget."

The group was so fired up that Neighbours initially missed hearing his name.

"He announced Perfetti and then all the boys started tapping their sticks and cheering, and then Crosby said me but I didn’t hear it," Neighbours, who started the season with the St. Louis Blues, said with a smile. "A couple guys heard it and they were looking at me and tapping me and I didn't know what they meant by it."

Crosby competed at the World Juniors twice, winning gold in 2005.

"Any time you get the chance to represent Canada it's an honour and a privilege," he told the players in the video. "To this day, I still have a close bond with the guys I played with there. I'll be watching and I know you guys will make Canada proud ... You guys have a special opportunity, especially with the chance to play at home, so have some fun, play together and good luck."

"We talk process, you know, stay with the process, every day and that's exactly what Kaiden does," Canada’s head coach said. "He's a real pro. He comes in every day with a cool, calm demeanour and lets his performance do the talking for him. Probably the best way to describe him is a silent leader."

"He's a guy who does it all on the ice," said Neighbours, who is Guhle's teammate on the Edmonton Oil Kings. "He's so skilled offensively, so hard to play against defensively, skates well, moves the puck really well. He's not the most vocal guy, but definitely a guy who likes to joke around and keeps the boys laughing and loose and things like that. He brings an element of everything when it comes to leadership. He's the right guy for the job."

Recently traded to Edmonton, Guhle spent most of his junior career in Prince Albert being mentored by head coach Marc Habscheid and assistant coach Jeff Truitt, who also worked with a young Shea Weber during his junior days in Kelowna.

"They coached Shea, so they moulded me and told me what he was like because obviously he's a great leader," said Guhle. "It's doing the right thing every day and holding your teammates accountable and being there for your teammates every day."

Perfetti pointed out that during practices Guhle leads the way in terms of work ethic and won't hesitate to chide teammates if he feels things are slipping.

"He's what you think of in that typical captain presence," Perfetti observed. "When he talks, it means something. He really exemplifies that. For the most part, he's lighthearted, joking around and having a good time, but when something needs to be said, everybody listens to him. He has that presence in the room."

Guhle and Perfetti both describe themselves as quiet, lead-by-example types. Neighbours, however, brings a different type of leadership to the group.

"I'm a guy who keeps things pretty light, likes to fool around on the ice and have fun," he said. "I'm pretty vocal as well. I'm someone who's not afraid to use his voice around the room."

Neighbours was named captain of the Oil Kings shortly after returning from the NHL this season.

"He has that outgoing personality," noted Cameron, "vocal, good humour type guy. He comes in and is charismatic. The players around him, they kind of gravitate to him."

"He likes to talk," Guhle said. "He's a loud guy, an energetic guy. His play kind of shows it too. He's in your face. He's hard to play against and he's skilled."

Jake Neighbours for the win pic.twitter.com/vWHAfW4cR0

Why is Bourgault a good fit on that line?

Bourgault has 22 goals in 24 games in the Quebec Major Junior Hockey League this season. No player on Team Canada has scored more goals for their club team.

"He's almost a goal a game, which is ridiculous," said Perfetti. "He's fast and smart. Me and Shane are pass-first guys and he's got that goal-scoring touch. It can be really dangerous if we're able to find him in the right spots. I think he's going to put a lot of pucks in the net. It's an exciting line and having four, five days now with Shaner, we're starting to build a little chemistry and learn each other's tendencies. It's coming along nice."

Guenther skated alongside Elliot Desnoyers and Will Cuylle on the fourth line. In his first practice on a regular line, Kent Johnson skated with Mason McTavish and Mavrik Bourque.

Connor Bedard and Logan Stankoven were the extra forwards.

The only line that didn't change was the group featuring Brandon's Ridly Greig between Neighbours and Vancouver's Justin Sourdif.

"We're gearing them up to be our hard-to-play-against line," said Cameron. "A line that's going to make you battle for every inch on the ice, have some energy, can be physical and certainly no slouch in the offensive zone."

"They bring that element of skill and sandpaper," said Perfetti. "I know that they're not a lot of fun to play against and a couple of them are kind of so-called rats out there. It makes it even more annoying for other teams when they can put the puck in the back of the net as well."

Of the three Western Hockey Leaguers, who is the most annoying to play against?

"I want to say Jake, because, Jake, man, when you get him in the corner he can knock you down pretty easily," said Sourdif.

"I guess it depends what annoys you the most," said Neighbours with a smile. "If you don't like a stick guy, you probably go with Rids. I'm probably the most physical and will be throwing my weight around a lot. Swords has got that speed and tenacity."

What does Greig do well with his stick?

"It's always in and around your hands, back of your legs, things like that," said Neighbours. "He's good at using it in the right way too. Stripping pucks, he's one of the zest I've ever played against at doing that. So, his stick's a big part of his game and it can be quite annoying."

At 6-foot-5, 214 pounds Owen Power is Team Canada's tallest and heaviest skater. The first-overall pick in July's NHL draft is a big presence on the ice, but the Michigan Wolverines defenceman doesn't always throw his weight around.

"He can play physical," said Michigan coach Mel Pearson. "I've seen it in practice. I'm probably the main [reason] he doesn't play more physical. Because of the way the refereeing is and because of his size, it's easy for him to get penalties, so I just tell Owen to back off and just get his stick on the puck and strip guys. He's learned to play more physical, but he's got such a great reach, is great on gaps and closes well because of his skating."

Power has taken seven penalties in 44 career NCAA games. Instead of putting players through the boards, the Mississauga, Ont., native has focused on putting more pucks in the net.

"He watches guys like Adam Fox and some of the best d-men in the league and he's really putting that stuff to use," said Johnson. "His deception's gotten a lot better on the blueline."

Power and Johnson are tied for the Michigan team lead with 23 points. Power only produced 16 points all last season.

"He's very patient," said Pearson. "He has the poise and patience. There's not a situation I've seen him in where he panics. It's just the way he is. I think playing in the [senior] World Championship for Canada last spring really helped him with just understanding the game and he's brought that here to his game."