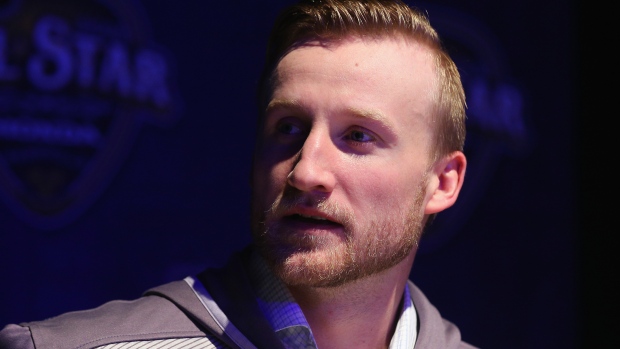 If you needed any evidence that another NHL lockout might be on the horizon, look no further than the type of free agent contracts executed during the 2015-2016 off-season.

Admittedly, this is attempting to project the future, the NHL’s collective bargaining agreement (“CBA”) is fully binding until September of 2019, at which time both the NHL and NHLPA will decide if they want to “opt out” of the contract. Under this scenario, the first season threatened would be 2020-21 campaign. Considering the lack of labour peace the sport has historically experienced, cynics would point out that such opt-out clauses essentially mean that there are just a handful of seasons left before the situation gets dicey.

It’s that type of forward thinking though that has created a lot of these quirky contracts signed this summer by players such as Steven Stamkos, Andrew Ladd, Loui Eriksson, and a number of other high-end talents these past few weeks. If you sift through the details, these contracts are comprised largely of money paid by way of signing bonuses as opposed to strictly annual salaries.

There are two notable mechanisms that signing bonus-laden contracts effect on teams. The first is that the higher the signing bonus amount, the more difficult it is to buy contracts out. Despite general managers stipulating to these contracts all of the time, we have seen this become a point of cap consternation for a number of teams, most notably with the Toronto Maple Leafs and David Clarkson’s deal a couple of seasons ago.

Clarkson, whose $36 million deal was bound with about 75% of signing bonus money, became essentially buyout proof. The only relief a team like the Maple Leafs could entertain, would be the buyout of a trivial base salary (approximately $2.7 million). But if they went the buyout route there, remember that all of Clarkson’s signing bonus money would have acted as dead money and would still have counted against the cap.

These signing bonus contracts aren’t just “buyout proof”; they are also “lockout proof”. In the event that there was a work stoppage in 2019, the only dollars at risk for players would come in the form of their base salaries. Since an increasing number of players have signed signing bonus-heavy deals, there are less dollars “at risk” in the event (a) one of the two sides opt out; and (b) the two sides cannot reach a new agreement.

Players and their respective agents have, for obvious reasons, come around to structuring their contracts this way. Decision making executives, who operate in a high-turnover rate with incredible pressure for results, are forced into agreeing to these terms. The result is an absolute explosion of these contracts.

Trending over many years, we can see how the signing bonus contracts were borne out of the construction of the current CBA, and how they will likely become a hot button issue in a matter of time:

First, here’s how the data looks on a gross level. We would expect 2016 to have the highest gross of signing bonus liabilities because of how many contracts are current through the given season. Conversely, we would expect to see 2022 with the least – few contracts currently extend out that far. (Data via both GeneralFanager and CapFriendly.) 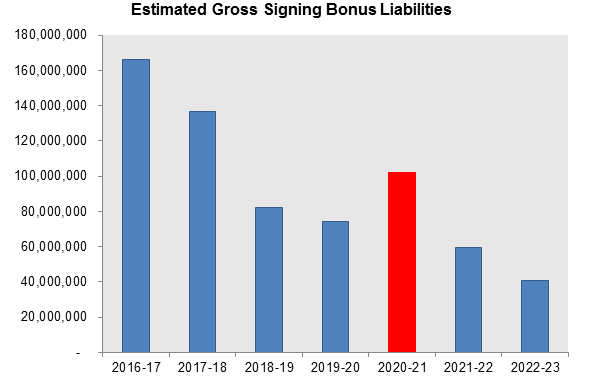 What is fascinating to see is that even on a gross level, there’s clear indication that players and free agents are building in lockout protection in preparation for the 2020-21 season. Despite only a limited number of players with contracts that far out, there is already well in excess of $100 million owed by way of signing bonuses prior to puck drop for that season.

To further articulate this point, we can look at this signing bonus through unitization on a per-contract basis. It becomes particularly obvious in the stage between the 2019-20 and 2020-21 seasons. 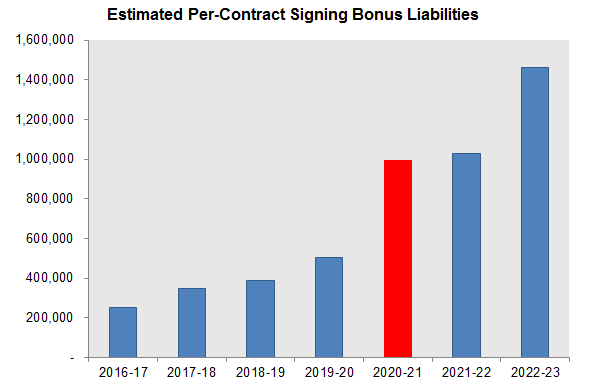 As contracts continue to trickle in over the next few years, the signing bonus issue is worth considering. Every new lockout-proof contract executed in the coming years is just a little bit less leverage owners will have when time comes to opt-out and renegotiate their next contract. While yes, they can still financially control a portion of the player union; that percentage will continue to decrease with time.

Conversely, both the players and counsel are likely to keep pushing for these types of deals, and why wouldn’t they? So long as teams remain in this ultra-competitive environment, they will continue to hand over these types of contracts in pursuit of a championship. Short-term, no problems!

As for the long-term? You can rest assured that the ownership side will take great issue with this, especially when the player union doesn’t kowtow to all of their demands.