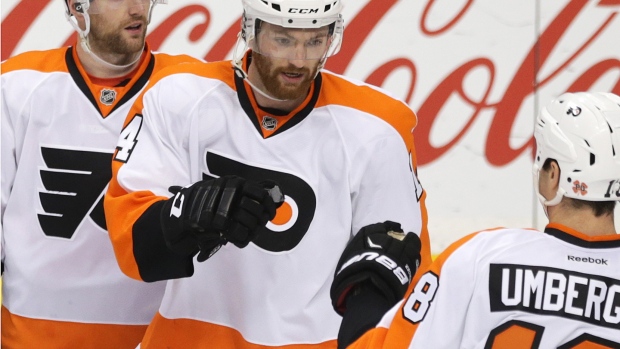 ST. PAUL, Minn. - After stumbling briefly, Wayne Simmonds and the Philadelphia Flyers found the right combination to extend their success on the road.

Simmonds scored the go-ahead goal late in the second period, lifting Philadelphia to a 5-2 victory over the Minnesota Wild for their third straight victory.

Vincent Lecavalier, Claude Giroux, Sean Couturier and Michael Raffl also scored for the Flyers, who have won the first three games of an eight-game road trip that spans 15 days.

"It's always nice to get the first six points on a road trip and we'll go home and enjoy our families and be ready when we come back," Simmonds said.

Marco Scandella and Charlie Coyle scored for Minnesota, losers of four in a row.

The Wild went through rough stretches last season as well, but pulled it together to make the playoffs and take Chicago to six games in the second round. But coach Mike Yeo doesn't want to hear about last year.

"If we keep sitting around waiting for that to reappear without actually doing the things that make that happen, then we'll continue to be disappointed," he said.

Simmonds broke a 2-all tie with his team-leading 15th goal of the season at 15:22 of the second period, beating goalie Darcy Kuemper high after teammate Brayden Schenn battled along the boards to secure the puck.

Zach Parise appeared to tie it early in the third, but the goal was overturned following a replay review.

Officials ruled that the left post was raised off the ice and the puck slid underneath the net.

"For a second it was kind of nerve-wracking, but I realized the net was up, and you could see it up," goalie Ray Emery said.

Three minutes later, Lecavalier tipped in Andrew MacDonald's slap shot for his third goal in two games to make it 4-2.

Raffl added an empty-netter late in the third and left the Wild searching for answers.

"We're supposed to be a band of brothers that goes out, night in and night out, and lays it on the line for each other," defenceman Matt Cooke said. "We found that last year. Just because we had it last year doesn't mean that it's here this year. We have to go out and earn the trust in each other."

Not falling behind early and chasing the rest of the game is one way to help redevelop that trust. Couturier and Giroux scored before the Wild had a shot in the first period.

Minnesota finally registered its first shot at 9:55 of the opening period, then got on the board when Scandella fired a slap shot past Emery 8 seconds later for his third goal in four games.

Minnesota tied it 3:43 into the second when Jason Pominville's misfire deflected off Coyle and went in on the power play. It was Coyle's first goal in 26 games.

"We kind of got off our game a little bit after we got the two-goal lead and started cursing a little bit," Simmonds said.

Thanks to another good night from Lacavalier, it didn't take long for the Flyers to pull it together and start rolling again.

Emery stopped 22 shots for his third straight win after dropping four in a row.