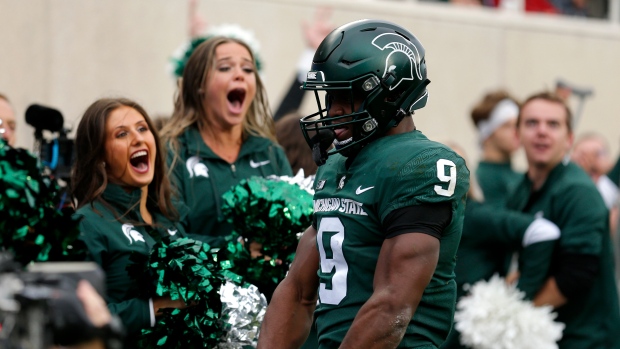 If the past couple of weeks are any indication, we are in for an incredible finish to the NCAA football season.

Outside of the undefeated and top-ranked Georgia Bulldogs, there is no “lock” to make the playoffs. Plus, we are about to get several matchups featuring top-10 teams, which will essentially serve as elimination games down the stretch.

This week’s marquee showdown features C.J. Stroud and the No. 4 Ohio State Buckeyes hosting Kenneth Walker III and the No. 7 Michigan State Spartans in a battle of two of the top three choices to win the Heisman Trophy. The winner of this game will get a huge boost in the push to make the College Football Playoff, while the loser will almost assuredly see their playoff hopes come to an end. We really couldn’t ask for more from a noon kickoff in the middle of November.

But wait, there’s more. The No. 5 Cincinnati Bearcats will have to tame a high-scoring SMU offence in another key matchup on their potential road to the CFP. The Mustangs would love to play spoiler this weekend, but the home crowd will be rocking in Cincinnati as the Bearcats look to firm up their credentials.

Here are my best bets for this Saturday’s NCAA football games.

Kenneth Walker and TreVeyon Henderson are set to go head-to-head in a battle of two of the best running backs in the FBS. Both are explosive, big-play guys who can completely change the complexion of a game. While the Spartans will lean heavily on Walker, they'll have some concerns about a pass defence that has allowed an NCAA-worst 329 yards per game through the air. In addition to Henderson, Ohio State has one of the best wide receiver trios in the FBS and they will look to stretch the Michigan State defence. While the Buckeyes can put up some big numbers offensively, the Spartans have looked pretty good outside of their loss to Purdue in a letdown spot after their big win over Michigan. If Walker can get loose, I think Michigan State can keep this game close and at least cover the spread. I’ll take the points with the Spartans in this one.

Boston College is 2-0 since the return of quarterback Phil Jurkovec and he looked much more like his old self last week, putting up five total touchdowns in a 40-31 win at Georgia Tech. In my opinion, Zay Flowers deserves more love as an unbelievable talent at wide receiver, and it’s great to see that connection finally get going. While things are trending up for the Eagles, Florida State is coming off an emotional, last-minute win over its rival Miami. However, that was their championship game. Coming off a big week of celebrations down in Tallahassee, I think this could be a potential letdown spot, especially with the early kick-off. I think this line is shorter than it should be, so I’ll roll with the Eagles here.

The Bearcats have a realistic shot to be the first non-Power Five team to make the College Football Playoff, which is why their play over the past few weeks has been somewhat confusing. Cincinnati has not exactly been steamrolling teams in the AAC, as they have not covered a spread in four straight games. Meanwhile, SMU can legit move the football. They’ve averaged nearly 500 yards of offence per game and have some serious weapons in Reggie Roberson and Ulysses Bentley. The Bearcats defence giving up 28 points last week to USF was very surprising, and we will see if they can step up for this game to deal with this Mustangs offence. This would be a devastating way for Cincy to blow their playoff hopes, but I could really see SMU giving them a scare here. If not, they just have to lose by 12 points or fewer.

Auburn is coming off one of the wildest games of last week. After taking a 21-3 lead over Mississippi State, the Tigers gave up 33 second-half points and lost quarterback Bo Nix to injury in a 43-34 loss. Talk about deflating. Now they head to South Carolina to take on a Gamecocks side that is 5-5 and starting to build some momentum on offence since making the switch to FCS transfer Jason Brown at quarterback. The Gamecocks have put up a combined 68 points in Brown’s two starts, including a blowout win over Florida. Auburn will start TJ Finley at quarterback in place of the injured Nix and he has some talent, as he showed in leading the comeback win against Georgia State earlier this season. This total just seems too low with the way the Gamecocks offence has improved, so I will avoid a side here and just hope last week’s Auburn defence shows up.

Michigan is coming off a big win over Penn State and has “the game” next week circled on the calendar next week against Ohio State. This is a classic sandwich letdown spot for the Wolverines. I am not saying Maryland is going to win this game, but Taulia Tagovailoa can put some points and potentially give them a scare if he can avoid the big turnovers (a big if at times). The Wolverines are way better than anybody expected this year, but you have to think their minds are all on getting Jim Harbaugh that first win over Ohio State next Saturday. This is more playing the spot than the team, so I'm going to take the home dog with points.