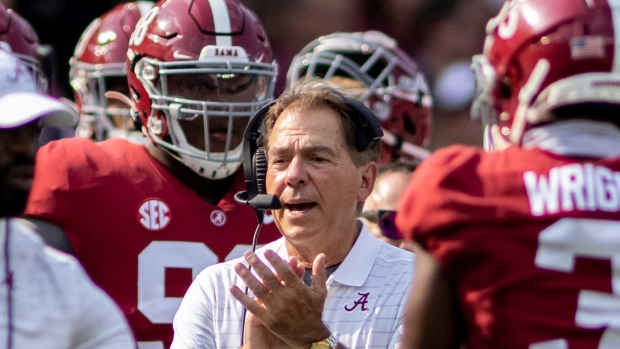 The biggest story in NCAA college football this week is USC firing head coach Clay Helton after losing outright as 17-point favourites in their Pac-12 home opener against Stanford in an embarrassing 42-28 defeat.

This week, the Trojans will travel to Pullman looking for a win against the Washington State Cougars.

Meanwhile, the biggest game of the weekend features No. 1 Alabama looking to continue its dominant start to the season as they head to Florida to take on the No. 11 Gators in the first true road test of quarterback Bryce Young’s career.

Here’s what I like this week on the NCAA football board.

#1 Alabama Crimson Tide at #11 Florida Gators
Spread: Alabama -14.5
Total: 60
I was texting with a friend last weekend about what they anticipated this line would be and my response after watching Florida versus USF was that anything under 20 would surprise me. So needless to say I was a little surprised to see 14.5 on the board. Alabama impressed me a ton in Week 1 and Bryce Young is now the favourite to win the Heisman Trophy. This offence is still dynamic and the defence has improved, which is scary. On the other hand, Florida lost Kyle Trask, Kadarius Toney and Kyle Pitts to the NFL, and no team in college football is able to reload the way that the Tide has consistently done year after year. Gators QB Emory Jones will struggle to move the ball through the air against this defence in a rematch of the 2020 SEC Championship. I think this game could get ugly.
THE PICK: Alabama -14.5

USC Trojans at Washington State Cougars
Spread: USC -8.5
Total: 62
As noted above, USC made a coaching change after last week’s loss. Donte Williams takes over as the interim head coach while Graham Harrell remains the OC. Junior quarterback Kedon Slovis has been hyped for a few years now and has not quite lived up to it, but he has a dangerous weapon in 6-foot-5 wide receiver Drake London. Expect London to have a big game here against a Cougars’ defence that has struggled defending the pass so far this season. Washington State had a rocky start, losing at home to Utah State. They project to be one of the weaker Pac-12 teams this season. I like the Trojans in a bounce-back spot here with the classic “interim coach boost.”
THE PICK: USC -8.5

Arkansas State Red Wolves at Washington Huskies
Spread: Washington -17
Total: 58
I don’t know if there has been a more unimpressive team through two games this season than the Huskies – at least in terms of teams that entered the 2021 campaign with high expectations. Jimmy Lake had the tough task of taking over for a legendary head coach in Chris Peterson and it hasn’t been a smooth transition so far. The Huskies lost the opener at home as a 22-point favourite to an FCS opponent in Montana. Last week, they managed just 10 points in a blowout loss to Michigan. The Red Wolves have a new coach that has had a lot of success at the Group of 5 level in Butch Jones. Last week, Arkansas State took Memphis to the wire in a 55-50 loss. While I do think the Huskies will win this game, the Red Wolves can score enough points to keep this one close. I’ll take my chances with Arkansas State getting 17 points in this game.
THE PICK: Arkansas State +17

East Carolina Pirates at Marshall Thundering Herd
Spread: Marshall -10
Total: 58
Marshall gave up just 13 points per game last season. Through the first two games this season, they’ve allowed a total of 17 points, picking up where they left off a year ago. Meanwhile, East Carolina has failed to score more than 20 points in each of its first two losses to Appalachian State and South Carolina. With both defences playing at a high level, I’m not expecting a high-scoring game here. I’ll take the under 58.
THE PICK: Under 58

Rice Owls at Texas Longhorns
Spread: Texas -26
Total: 52.5
So it turns out Texas is not quite “back” yet. Arkansas just gave it to them last week in a 40-21 win. Following the loss, the Longhorns decided to make a change at quarterback, going with Casey Thompson as the starter this week. Thompson started the Alamo Bowl last year and impressed in a 55-23 win over Colorado. It’s a great spot for Thompson, as Rice just got smoked by Houston 44-7 last week. Plus, the Longhorns will be that much more motivated to lay a beating on their in-state foe coming off an embarrassing loss. Running back Bijan Robinson is one of the best in the nation and will be a big help to Thompson in his first start of the year. I’d be surprised if this Texas offence doesn’t top the 50-point mark in this game. With such high expectations for the Longhorns offence, I’ll take the over in this one.
THE PICK: Over 52.5