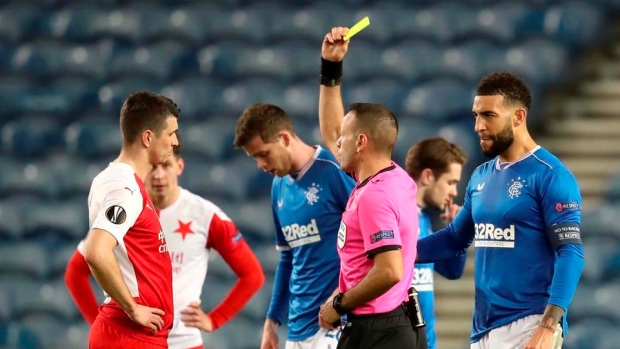 GENEVA — Slavia Prague defender Ondrej Kúdela was banned for 10 games by UEFA on Wednesday for racially abusing a Black opponent in the Europa League.

UEFA said its ban would apply to “club and representative team competition matches,” including the rest of Slavia’s Europa League campaign and the Czech Republic’s games at the European Championship.

The 34-year-old Kúdela has recently been a starter for the Czechs, who begin their Euro 2020 program in June against Scotland in Glasgow. It was in the same city that Kúdela was found to have racially abused Rangers midfielder Glen Kamara on March 18.

Kúdela covered his mouth with both hands when he spoke into Kamara’s ear late in a stormy Europa League round of 16 game at Ibrox Stadium last month when Slavia was already sure to advance to the quarterfinals.

He acknowledged swearing at Kamara but denied using racist language that another Rangers player also claimed to have heard.

Kúdela, Slavia and likely the Czech soccer federation can challenge the ban, first to UEFA and then the Court of Arbitration for Sport, though 10 games is the minimum for racial abuse in UEFA’s disciplinary code.

An appeal looked unlikely after Slavia published apologies by the club and its player to Kamara and offered to work “with major anti-racism British organizations.”

“I am taking positive steps to prevent such a situation from happening in our club ever again,” said Jaroslav Tvrdík, Slavia's chief executive.

In the club statement, Kúdela insisted he had not been racist but acknowledged that “it was a mistake to approach Glen Kamara and talk to him.”

“There were emotions in the game and I’m not in a position to return it back. I’m really sorry about it,” he said.

The incident flared in the closing minutes with Slavia leading 2-0, and 3-1 on aggregate, and Rangers down to nine players after two were sent off earlier in the second half.

As a group of players clashed, Kúdela sought Kamara to speak in his ear, provoking an immediate and angry response from the Rangers player and a teammate.

Kamara’s ban will not stop him from playing for Finland at Euro 2020. His ban, which he could appeal, is set to apply during qualifying for the next Champions League. Rangers already won the Scottish title and will enter the third qualifying round, while Slavia — which is the unbeaten leader of the Czech league — is set to enter one round earlier.

The Fare group, which advises UEFA on anti-discrimination, welcomed the verdict for Kúdela as “a marker for others to follow.”

“Since September 2020 we have seen at least six high-profile cases of racism or homophobia involving players abusing other players on the field of play worldwide," Fare said in a statement. “Most cases have led to no action by national football associations.”

“We hope this decision can give Glen Kamara and all who campaign against discrimination and equality in football a sense of justice.”

Kúdela is not the first player to be banned for 10 games for racial abuse since UEFA introduced the sanction in 2013. A Ukrainian goalkeeper for Latvian club Ventspils, Kostyantyn Makhnovskyi, was also banned for 10 games in 2019 after an incident in the qualifying rounds of the Europa League.

A player in Belgium's national futsal team got a 10-match ban in 2014 for using an offensive “quenelle” arm gesture.

UEFA had provisionally suspended Kúdela from Slavia’s first-leg game against Arsenal last week. He has nine more games of the ban left to serve in UEFA competitions.