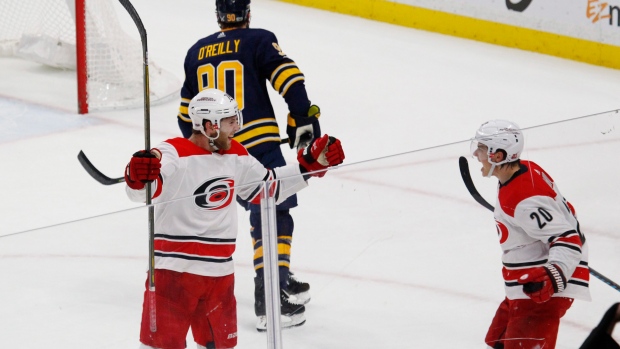 BUFFALO, N.Y. — The Carolina Hurricanes are heading home on a winning streak.

Jaccob Slavin scored 2:15 into overtime to give the Hurricanes a 5-4 victory over the Buffalo Sabres on Friday night.

Jordan Staal, Derek Ryan, Elias Lindstrom, Justin Williams and Slavin each had a goal and an assist to help the Hurricanes win their second in a row to close out a season-long six-game trip after starting 0-2-2.

"That's huge, especially when we started off the road trip like that," Ryan said.

"It's not good enough to get a point," Eichel said. "It seems like it's been the recurring them here of late."

The Sabres have earned a point in five of their last six games but have just two victories during that stretch.

Lindholm set up Slavin in the slot for the winning goal after Cam Ward stopped Kane on a breakaway for his 37th save.

"We've been on the other side of those quite a few times," Staal said. "At the end of the game there, we needed that save and he made it."

Eichel had goals 10 seconds apart in the third period to tie it. He scored on a long straightaway shot through traffic and then got his 11th of the season and a wrist shot from the slot with 10:26 left in the period.

Staal, Ryan and Lindstrom scored within a four-minute span to give the Hurricanes a 4-2 lead seven minutes into the third period.

Staal scored off the rebound of Slavin's shot to tie the game at 2-2 three minutes into the third. Ryan deflected Brett Pesce's shot into the net to put Carolina ahead about a minute later and set up Lindhold on a 3-on-2 to extend the lead just before the 13-minute mark.

"We're a team that hasn't scored easy and hasn't scored a lot, so it's nice to see us get a few here this evening," Hurricanes coach Bill Peters said.

Buffalo got its first two goals off rebounds. McCabe made it 2-1 a little over a minute into the third period on a wrist shot from the right circle following Eichel's shot.

Eichel scored his first goal on backhand from the left side of the crease. Ward made the initial stop after Kane deflected McCabe's long slap shot.

"There was definitely waves of momentum," McCabe said. "I liked our game for the most part, but we had too many mistakes that led to goals."

After a scoreless first 30 minutes, Williams knocked in the rebound from Jordan Staal's shot midway through the second period. The Hurricanes held the lead for just 30 seconds before Eichel's goal.

NOTES: Eichel had the Sabres' first home hat trick since Thomas Vanek on April 5, 2011. ... Sabres D Nathan Beaulieu returned to the lineup after missing five games due to an illness. ... Buffalo has not scored a power-play goal against Carolina in the last 12 meetings. ... This was the second of three matchups between the Hurricanes and Sabres this season. They play again Dec. 23 at Carolina.

Sabres: Three days off before hosting Boston on Tuesday night.