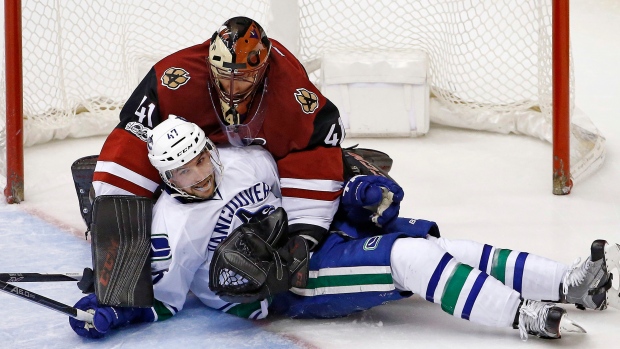 GLENDALE, Ariz. — Vancouver had a hard time getting a shot, let alone a goal, in Arizona on Thursday night.

Alexander Burmistrov scored his first goal as a member of the Coyotes and Mike Smith earned his 31st career shutout — first this season — in a 3-0 victory over the Canucks on Thursday night.

Smith, who will play in this weekend's All-Star Game, needed just 19 saves to get the shutout.

Burmistrov's power-play goal came in his sixth game since being claimed off waivers from Winnipeg and helped give Arizona its first three-game winning streak of the season.

"We definitely have played better as of late and it's definitely calmed the workload down for me significantly," Smith said. "That just shows the good things we've done in front of me and the work we've put in to get better."

Lawson Crouse also scored for the Coyotes against the punchless Canucks, who didn't get a shot on goal for the first 28:12 of the game.

"It was definitely weird to look up at the scoreboard and see a zero up there," Smith said, "but that happens."

He had to guard against any defensive lulls during that long lapse.

Tobias Rieder got an empty-net goal with 34 seconds to play, his third goal in three games.

"We go into the break feeling much better about ourselves than we have at a lot of points in the year," Arizona coach Dave Tippett said.

Vancouver didn't get a shot on goal the entire first period and was outshot 31-19.

The Canucks' Ryan Miller had 28 saves.

"I think they've played well at home lately," Vancouver coach Willie Desjardins said. "We knew that, but it doesn't matter how well a team is playing, you still should be able to get stuff to the net. The first two minutes, we had two real good chances and didn't hit the net. We had (another) real good chance, but didn't get much after that."

The Coyotes snapped a five-game losing streak against Vancouver.

"They came hard at us," the Canucks' Henrik Sedin said, "and we weren't able to answer."

Arizona dominated most of the game, but didn't score until Crouse sneaked the puck past Miller on a wraparound with 7:04 left in the second period.

The Coyotes had all the offensive pressure in the opening period, outshooting the Canucks 6-0, but had nothing to show for it. Several attempts were from close range, but Miller fought them off. It was the second time in franchise history that the Coyotes had not allowed a shot in the first period and the fourth time they hadn't allowed one in any period.

The difference reached 11-0 before Vancouver finally got its first shot when Alexandre Burrows sent the puck most of the way down the court in a clearing attempt on an Arizona power play and Smith easily stopped it 8:12 into the second period.

Moments later, Smith stopped a much more serious threat with a glove save from close range and knocked one away with his toe just before Arizona's first score.

Burmistrov's goal came after a double-minor four-minute penalty for high sticking against Vancouver's Sven Baertschi. Vancouver's Michael Chaput attempted to clear the puck away from the net, but it went right to Burmistrov, whose strong wrister sailed past Miller to make it 2-0 4:29 into the final period.

The Canucks were playing for the second night in a row. They won at Colorado 3-2 on Wednesday.

NOTES: The last time the Coyotes didn't allow a shot in a period was March 21, 2003, at Colorado. ... Officials initially gave Vancouver a first-period shot, but took it away during the break. ... The Canucks still are 8-2-1 in their last 11 games against Arizona. ... Vancouver had 41 shots in its win at Colorado Wednesday night. ... Arizona wasn't called for a penalty.

Canucks: Have a week off for the All-Star break before meeting San Jose next Thursday.

Coyotes: After the All-Star break, Arizona is home against the Los Angeles Kings next Tuesday.