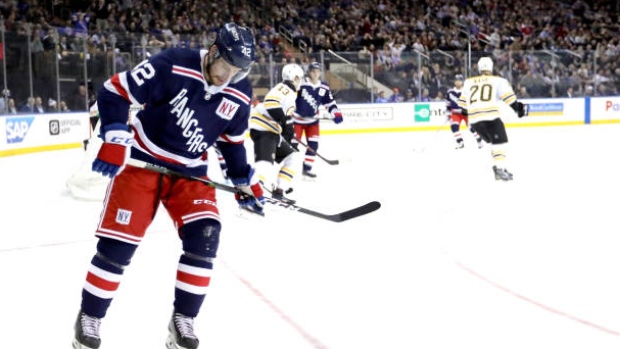 Smith, 29, signed a four-year, $17.5 million contract with the Rangers in June, which includes a modified no-trade clause. He has one goal and seven assists in 44 games with the Rangers this season.

“He got off to a slow start, we worked with him in a number of different ways, and he seemed to be having a hard time finding his game,” head coach Alain Vigneault told The New York Post. “This might be a little bit drastic, but management and the coaches felt this was the way to go for our team right now.”

“We’ve done some different things to try and get him going, we’ve scratched him [10 times], and he just hasn’t played that well,” general manager Jeff Gorton added. “There’s no real insight into [why], but he just hasn’t been able to find his game. Based on what we’ve seen in the past, Brendan is a good player who can play physical and who’s a good skater, but really, those elements haven’t been there this year.

“This is something, at this time, is best for him to go on waivers, see what happens, and then we’ll go from there.”

Kruger, who was traded from the Chicago Blackhawks to the Vegas Golden Knights and then to the Hurricanes last summer, has just one goal and six points in 48 games with the Hurricanes this season. He served as a healthy scratch in the team's loss to the Philadelphia Flyers on Tuesday.

TSN Hockey Insider Pierre LeBrun notes that though Kruger's cap hit sits at $3.08 million, his actual salary drops to $2.3 million. LeBrun believes the Hurricanes may be able to trade the forward ahead of the deadline if they're willing to retain some of Kruger's cap hit.

Jooris, 27, has three goals and six points in 30 games this season. He last suited up for the Hurricanes on Jan. 20.

Both Kruger and Jooris have been assigned to the AHL.