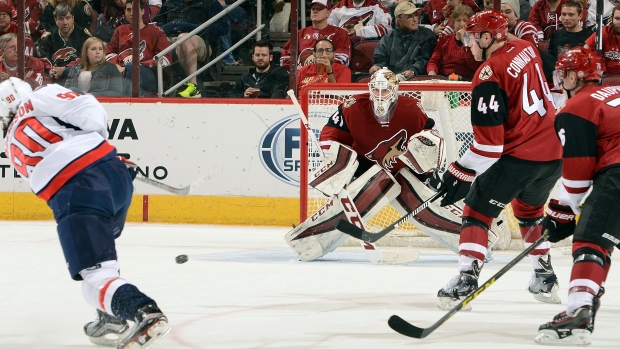 GLENDALE, Ariz. - The Washington Capitals have already clinched the best record in the NHL. They were playing for the second straight night and third time in four days.

The energy wasn't there, and the Arizona Coyotes pounced.

Mike Smith stopped 31 shots for his second shutout since returning from injury, Shane Doan and Oliver Ekman-Larsson scored 27 seconds apart early in the third period, and the Coyotes knocked off the NHL leaders 3-0 on Saturday night.

Brad Richardson also scored in the third and Max Domi had two assists in teaming with Doan on a dominant night by Arizona's second line.

Doan redirected Domi's shot past Philipp Grubauer for his team-high 27th goal at 5:18. Ekman-Larsson quickly followed with a point shot that deflected off Washington's T.J. Oshie's stick and over Grubauer's shoulder for his team-best 52nd point.

"It kills your mojo a little bit," Oshie said of the odd caroms.

Washington's Alex Ovechkin and Dmitry Orlov each hit the post after that, but Richardson put it away with his 10th goal with 6:02 left.

Smith has stopped 225 of 234 shots since his 40-game absence because of a core muscle injury. It was his 30th career shutout.

"Smitty was excellent, we caught a team on a back-to-back and we were able to capitalize on a chance or two," Arizona coach Dave Tippett said.

Grubauer made 24 saves filling in for No. 1 goaltender Braden Holtby in the Capitals' second loss in three games since claiming the Presidents' Trophy for best record in the NHL.

It was only Washington's third shutout, but its second in five games.

"We hit two posts and that's just karma," Trotz said. "That's just a reminder you've got to compete at the level your opposition was."

Unlike a night earlier in Colorado when several shots off the post didn't prevent their franchise single-season record 55th win, the Capitals lost in regulation for only the 17th time.

"The last two games we've hit seven posts," Grubauer said. "Maybe not on our lucky side right now. But I'm sure when the playoffs come around they're going to go in for us."

The Capitals have locked up home-ice advantage throughout the playoffs, so the big milestone left is getting Holtby two more victories to surpass Martin Brodeur's NHL record of 48 wins set in 2006-07 with New Jersey.

But a night after making 17 saves, Holtby was given the day off. And Washington came out sluggish as it played a second straight game without injured centre Nicklas Backstrom

The Coyotes were playing their final home game, two nights after a loss in Dallas eliminated them from playoff contention for the fourth straight year.

The Coyotes got Ekman-Larsson back after he missed a game with an illness. But Martin Hanzal (upper body) was sidelined again.

Smith kept it scoreless through two periods by making 14 saves in the middle period, the best a snap glove save of Ovechkin's wrist shot off a 2-on-1.

"No one wants to have your last home game be a regular-season game," Doan said. "But if you do, you want to find a way to win it. And it's nice to do, especially against that team."

NOTES: Trotz doesn't expect Backstrom (upper body) to be out an extended period. ... Washington LW Jason Chimera took a full-speed tumble into the boards early in the third period. He retreated to the dressing room, but later returned. ... Coyotes D Michael Stone underwent knee surgery Friday to repair a torn ACL and MCL. Tippett said he'll be out a minimum of six months, meaning he may not be ready for the start of next season. ... Arizona native and likely No. 1 draft pick Auston Matthews watched from the stands. ... The Coyotes close with four road games.