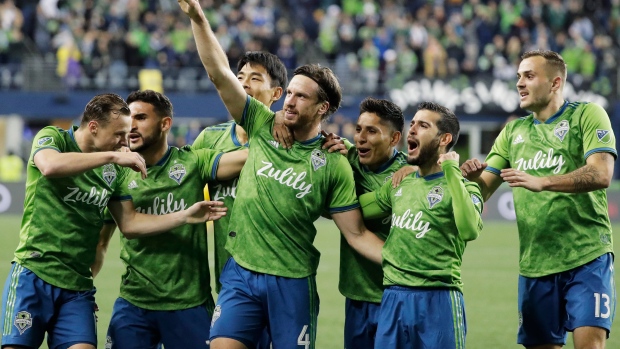 SEATTLE — Nick Rimando did all he could for the first hour in an attempt to prolong his career for one more game and frustrate the Seattle Sounders.

Gustav Svensson finally found the breakthrough and with it began the eventual end to the career for one of the best goalkeepers in MLS history.

"We know we have guys who can finish chances, but Rimando, in his last game, he was amazing," Seattle's Kelvin Leerdam said.

Svensson scored his second career playoff goal in the 64th minute, Nicolas Lodeiro added the capper in the 81st minute and the Sounders advanced to the Western Conference final for the third time in four seasons with a 2-0 win over Real Salt Lake on Wednesday night.

Svensson flicked a header off a corner kick past Rimando midway through the second half after Seattle had dominated scoring chances all night. It was Svensson's first goal of the season, and Lodeiro provided the capper 17 minutes later.

When the final whistle blew, Rimando stood in the penalty area for a few minutes, accepting handshakes and hugs from teammates and opponents. It was a memorable farewell to MLS after 20 seasons for Rimando, who was the best player for Salt Lake but couldn't withstand all of Seattle's pressure and was eventually beaten late.

"This is the end of my career, but maybe I'll stay in the game somehow," Rimando said. "Right now, it sucks because we wanted to go a bit further, even though people didn't have us in mind. The guys gave it their all. All we could have done is give it our all and that's what we did. Unfortunately, we didn't come out on the right side of the results."

Rimando finished with seven saves in his final game. He will leave MLS as the league leader in wins, saves, shutouts and games.

"Tomorrow? I'm going to take my kids to school in the morning. ... I'll wake up and get them breakfast and check them into school. Then kick my feet up and have a couple whiskeys maybe, and relax," Rimando said.

Seattle will face Los Angeles FC or the LA Galaxy in the conference final next Tuesday. The Sounders will host if it's the Galaxy; they will go to Southern California if LAFC is their opponent. Seattle won each of its last two trips to the conference final under the old format of the MLS Cup playoffs.

"Organizationally this franchise has always been about winning and we want to continue that," Seattle coach Brian Schmetzer said.

Svensson's role for Seattle is a defensive midfielder, but he was the scorer the Sounders needed on a night Rimando kept RSL in the game.

While RSL controlled possession, Seattle dominated scoring chances, seemingly each one getting closer to finally getting past Rimando. Leerdam had a pair of chances denied early in the second half. Rimando first batted away a volleyed attempt then made a quick reaction to keep Leerdam's deflected cross off Nedum Onuoha from going in for an own goal.

But Rimando was helpless on Seattle's breakthrough. The corner kick from Lodeiro came to the near post and without a defender on the goal line at the post Rimando couldn't react in time.

"It was a great corner. We've been working on that for a long time now," Svensson said.

Lodeiro's insurance goal was started by a perfect pass from Brad Smith to Raul Ruidiaz, who smartly left it off for Lodeiro to finish.

Salt Lake's Everton Luiz was shown a red card in the 85th minute for a challenge on Svensson. RSL finished with just seven shots and only one on target.