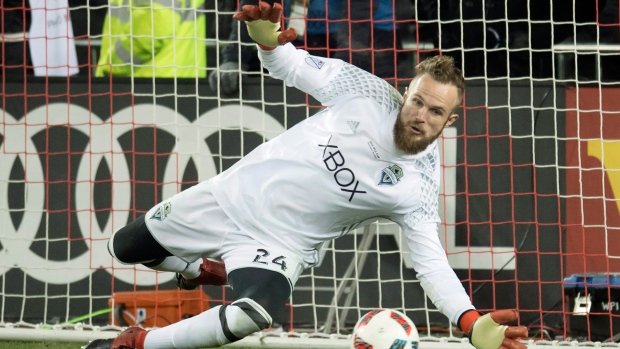 TORONTO — There were far more bad times than good ones in Stefan Frei's five years of playing in net for Toronto FC.

But Saturday night at BMO Field, in the city where he got his Major League Soccer start, Frei was named most valuable player of the MLS Cup for a performance that was jaw-dropping at times, and easily the finest moment of his pro career.

And moments after the victory, the Seattle goalkeeper reflected on the full-circle moment.

"I think you play to win and obviously during my time here we had limited success which made it difficult, but throughout that time the fans were always the highlight," said Frei, who was taken by Toronto 13th overall in the 2009 MLS Superdraft.

"(But) we had a chance to make history and this is what you live for," he continued about the Sounders. "This is what you want to be a part of. We've made Sounders history and for me it could have happened anywhere, I don't care as long as I'm with my team and my teammates."

Frei, who arrived at the post-game news conference soaked in beer — the smell was the giveaway — made a spectacular save on a Jozy Altidore header, and then stood strong through a penalty shootout as the Seattle Sounders beat Toronto FC 5-4 to win the MLS Cup.

Frei's save came in the 108th minute, when Altidore fired a blistering header that looked destined for the top right corner. But Frei stretched out his six-foot-four frame backwards into the net like Keanu Reeves in "The Matrix," and with a glancing touch, sent the ball out of danger.

"Yeah it looked like it was going to go in and then all of a sudden here comes his paw. It was a tremendous save," said Sounders coach Brian Schmetzer.

"I'm not so sure Stef ended (his time in Toronto) on a bad note, he certainly talks very highly of the Toronto organization," the coach added, pausing to drink from a bottle of Heineken. "But maybe it was just time for him to have a fresh start. Certainly very proud of him, I know you guys gave him a start, both of these franchises should be proud."

The Seattle victory might have seemed unheard of back in July when the franchise was wallowing way down deep in the Western Conference standings, and looked destined for their worst season in their short eight-year history.

Sigi Schmid was fired as coach in July, and Schmetzer, a Seattle native who'd played professionally in the city and was an assistant with the team through their first seven seasons, took over. The move sparked a mid-season turnaround.

"It was a tough first half of the season, but the guys always believed, the belief was always there in the locker-room, we pushed out the outside noise," said Seattle forward Jordan Morris. "Once we made the playoffs, it's a whole a new season. We did that and then kind of got hot at the right time.

"This team has a great mentality and I think we showed that tonight."

The post-game locker-room was a blur of blue and green and beer. Players chugged on bottles of champagne. A large recycling bin sat in the middle of the room, full to the rim with empties.

Panamanian defender Roman Torres held court with a half a dozen Spanish-speaking journalists, while teammates hollered at the barrel-chested, big-haired defender to hurry up.

Torres, who scored the deciding goal in the penalty shootout, and fellow centre back Chad Marshall were two giant bricks in a virtual wall that Toronto stars Sebastian Giovinco and Jozy Altidore ran head-long into all night.

"He's a typical centre defender," Sounders defender Brad Evans said of Torres. "That's huge. Tonight was a night where that was going to be a key battle, their two star forwards against our two centre backs. And our two came out on top, along with our goalkeeper as well."

Some 1,500 Sounders fans made the trip to Toronto, and the players made a beeline for their section in the northeast corner of BMO Field to applaud the delirious supporters.

Comparisons between the two franchises have been drawn this week. Seattle enjoyed the highest attendance in the league this season, while Toronto was No. 3. Toronto entered the league in 2007, and Seattle debuted two years later.

But the Sounders have made the playoffs in all eight seasons, and now: an MLS championship.

"If it came in the first year or the eighth year, this championship meant a tremendous amount," Evans said. "You win it one year, it's awesome, if we win a second one next year, it's phenomenal. But you always remember your first. And to do it only eight years into a club is saying something."