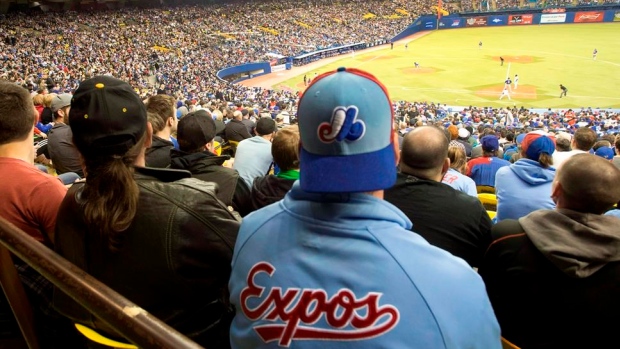 Baseball at Olympic Stadium in Montreal , The Canadian Press

It seems to come up every year the Toronto Blue Jays play exhibition games in Montreal: Will the Expos ever return to the city?

“This spring I had a conversation – and this is not like it was with Rob Manfred the commissioner or some owner – it was a mid-level person in Major League Baseball and it surprised me with such the ease that he had to say next round of expansion, which would take place after they settle the franchise situations with the Rays and the Athletics – two teams looking for new ballparks.

But once they do the next round of expansion, yeah Montreal will be involved. And he said it as if it was a done deal,” Olney said Tuesday morning on First Up with Michael Landsberg and Carlo Colaiacovo.

“He doesn’t have the power to make it happen, but I was really surprised that he said it with that much confidence and that much ease because I thought it would be more of an open question like okay, once we’re there let’s examine these things. But let’s face it, you know, what was it, 50 years ago that Major League Baseball determined that Montreal would be a good place for baseball? Maybe that’s how they feel internally now.”

So you’re saying there’s a chance at expansion, Olney was asked.

Olympic Stadium has a capacity of more than 56,000 seats but less than half were full Monday night as the Jays took on the Milwaukee Brewers in the first of a two-game series before the start of the regular season.

Ever since the Expos departed for Washington and became the Nationals following the 2004 season, efforts have been ongoing to bring a team back to Montreal.

Stephen Bronfman, the executive chairman of Claridge Inc., is the leader of a group of Montreal businesspeople seeking to bring back baseball to Montreal. He said Monday that he and development group Devimco are working toward securing land near downtown to potentially build a stadium in an effort to land an MLB franchise.

“Don’t have to say we need to be ready,” Bronfman said Monday. “We are ready.

“I’ve been living this as you all have for a long time. All I feel is positive movement. I’m hopeful, but I think this is a big year.”

Milwaukee took Monday’s matchup with Toronto 10-5. The Jays will open the regular season Thursday afternoon at home against the Detroit Tigers.