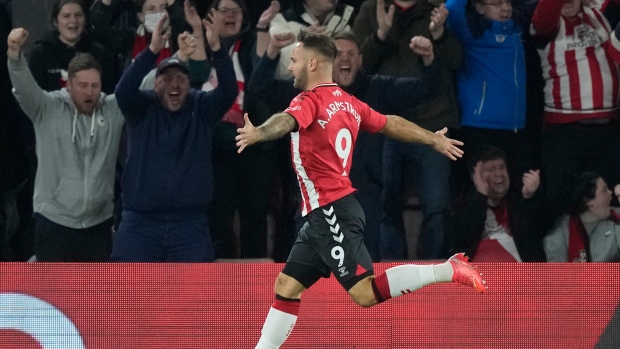 Armstrong netted his first goal since the opening day of the season with a shot past Emiliano Martinez in the third minute, after Matty Cash lost the flight of a seemingly harmless ball forward.

Both sides had plenty of chances after that in a game which saw Ralph Hasenhuttl’s Southampton dominate the first half before Villa threatened a comeback in the second.

Villa striker Danny Ings was not fit to return to Southampton after leaving the club in the offseason, while fellow summer signing Emiliano Buendia had the best chances to equalize but missed the target twice in quick succession after the break.

Martinez then prevented Southampton from doubling the lead by diving at full stretch to tip over a Che Adams header after a free kick into the area.

Striker Ollie Watkins shot wide with five minutes remaining in what proved to be Villa's last chance to rescue a point.

Villa has not collected a single point since winning at Manchester United on Sept. 25 and could find itself in the relegation zone after the rest of the weekend's matches with just 10 points from 11 games.

Southampton provisionally moved up to 12th with 14 points.