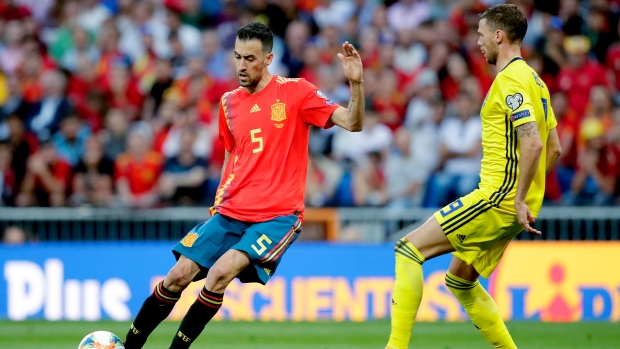 Spain and Sweden got to know each other very well in Group F during qualifying for EURO 2020, now they will meet in their tournament opening game as they have once again been drawn together, this time in Group E.

Spain topped that qualifying group and earned a 3-0 victory over Sweden when the teams met in Madrid.  They played to a 1-1 draw in Solna as Sweden conceded a stoppage time equalizer after taking a 50th minute lead.

Sweden has struggled in the last three European Championships, they finished bottom of their group in 2016, 2012 and were third in 2008, but did not advance past the round robin.

The last time Sweden saw the knockout stage was in 2004 where they lost on penalties to the Netherlands in the quarterfinals.

Janne Andersson knows his team will be tough as they open the tournament on the road in Seville, but believes his team can rise to the challenge.

"Playing Spain away is one of the toughest challenges in the world of football today,” said Andersson. “It's an exciting challenge and we need an absolute top performance, but we've had those in the past and I hope we can get another one. We have threatened them in the past. We know that if we can get everything to click, we absolutely have a chance on Monday."

While their recent Euro results have left a lot to be desired, Sweden did advance to the quarterfinals of the 2018 World Cup in Russia.

Spain on the other hand are trying to recapture the success they had prior to Euro 2016 as they won both the 2008 tournament in Austria and Switzerland and the 2012 event in Poland and Ukraine.

Most of the cornerstones of those teams, that were also able to win the 2010 World Cup in South Africa, are no longer part of the squad, but expectations will always be high for Spain.

Head coach Luis Enrique is not planning to get ahead of himself at EURO 2020.

"If you ask me to sign up for losing tomorrow but winning the next two and qualifying first in group then … I’d be OK with that. But the truth is the first game is like taking the temperature: 'Are we OK?' That’s what it’s like. The first game can serve for generating confidence, seeing how much the competition means to us, and if you win in a way that shows your qualities then that’s a great way to start."