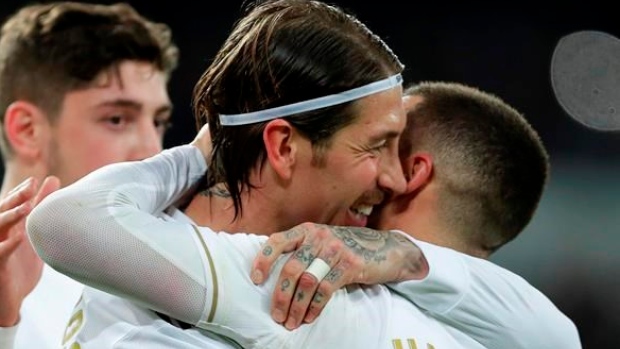 MADRID — The Spanish league took another step toward restarting the soccer season by allowing teams to resume group training on Monday.

Practices were closer to routine for the first time since the league was suspended in mid-March because of the coronavirus pandemic.

Keep-aways, exchanges of passes and player interaction were back at the training camps. Up to 10 players are allowed to practice together in what is expected to be the second-to-last phase before the competition can resume.

The move by Spain came after the Bundesliga in Germany became the first top soccer league to resume on Saturday.

Full squad training is expected to begin in the coming weeks, with the Liga hoping to restart on the second weekend of June. Players had been training individually since last week.

The league said the start of group training represented “a significant step forward on the road towards restarting professional football in Spain.”

The Spanish government at the weekend authorized all teams to resume practicing in groups even though stricter lockdown restrictions remained in place in parts of Spain. Cities such as Madrid and Barcelona have not been allowed to loosen confinement measures like most of the country, but teams such as Real Madrid and Barcelona have been given the go ahead to move into the second phase of training.

The league limited the practice groups to 10 players even though the government said those in regions where more restrictions have been lifted could use 14 players.

“It will be good to be able to set all training routines on an equal footing,” Spanish league president Javier Tebas told league broadcaster Movistar late Sunday. “It’s very important that every club have the same chance to be in good shape.”

All training camps are being constantly disinfected, and everyone involved in practices has to be tested daily for COVID-19.

Tebas said he expects the Spanish league’s eventual return to look very similar to what happened in Germany.

“We have congratulated the Bundesliga,” Tebas said. “They put in a lot of effort into this. It’s an example to follow.”

Tebas said he hoped for the Spanish league to resume on June 12 in empty stadiums, but reiterated it will happen only with permission from local authorities.

Among the players back training on Monday was Fali Giménez, a defender from second-division club Cádiz who had yet to practice because of concerns about the coronavirus. He joined his teammates after testing negative for the virus.

Players from first-division club Eibar also trained together after earlier saying they were afraid to. They trained individually last week.

Players from second-division club Rayo Vallecano did not train as planned on Monday as a protest against reduced salaries. The players want to be taken off furlough before they return to practice.

Players from second-division club Elche also refused to practice for the same reason last week and the club eventually complied with their demands.