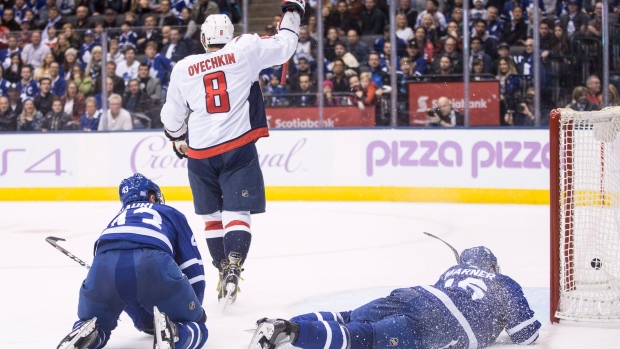 TORONTO – The Maple Leafs fell behind the Washington Capitals early on Saturday night, and even a spirited third period rally couldn’t lift them past the visitors in a 4-2 loss. It was Toronto’s third loss in four games and dropped them to 15-9-1 on the season.

Starting on time, at last

For once the Leafs actually got the start they wanted, it just didn’t amount to anything on the scoreboard. Toronto had been on their heels in the first period of their last four games getting outshot 55-26 after the first 20 minutes in that span, but only giving up one first period goal in total. The Leafs dominated the first 10 minutes against Washington, holding the Capitals off the shot clock until 5:23 of the period, and by the end of the frame they were up 11-7 in shots. But while Toronto did a better job limiting chances, Curtis McElhinney didn’t do as fine a job keeping pucks out of the net as Frederik Andersen had in his previous five starts. The Leafs ceded two goals to Alexander Ovechkin in the final eight minutes of the first period to trail 2-0. It wasn’t that Toronto wasn’t playing well – their turnovers were minimal and the cycle was buzzing – but the details ultimately led to their demise. Mike Babcock said after the game the Leafs could have cut Ovechkin off more in the neutral zone or gapped up better on defence to prevent the first goal. But for the most part he was pleased with how his team executed in the first frame and beyond, especially after they’d made it a point of emphasis to turn the troubling trend of slow starts around. Toronto ended the night with a 29-20 advantage in shots. It was just the second time in their last 11 games that Toronto hadn’t been outshot and the first time since Nov. 6 they hadn’t allowed more than 30 shots on goal.

By the time the final frame rolled around, the Leafs were down 3-0 and began throwing everything they had at Holtby and the Capitals. For the first time all game, Babcock blended his lines by swapping out William Nylander for Connor Brown on the Auston Matthews line and the new-look unit helped produce a goal on their first shift - Jake Gardiner quarterbacked a strong cycle shift and ended it with a point shot through traffic that beat Braden Holtby top shelf. Gardiner said after the game that goal sparked the Leafs to what was one of their most impressive periods of hockey this season. Less than five minutes later, Gardiner’s defensive partner Nikita Zaitsev got below the hashmarks and chipped a puck off Taylor Chorney and over Holtby to bring the Leafs within one. Zaitsev admitted after he’d been aiming to hit Dominic Moore with a centering pass but the puck took a fortuitous hop. Toronto had its best possession period of the night in the final 20 minutes (71 per cent) and despite it being the second night of a back-to-back, the Leafs had more jump than they’d shown all night. Right up until Ovechkin potted his final marker, an empty netter with 8.7 seconds left, the Leafs never relented.

Not even Mike Babcock denies that McElhinney gets all the worst starts for the Leafs - his only opportunities come on the second night of a back-to-back. In those instances where the team simply isn’t going to be as sharp, the goaltender absolutely has to be. Against the Capitals, McElhinney was not. Ovechkin’s first goal went right under the netminder’s arm; his second, on the power play, was equally stoppable. Even Jakub Vrana’s goal, coming off a partial breakaway when he blew past Zaitsev at the blue line, beat McElhinney cleanly. Those one-on-one chances where the goaltender can track the shooter mostly unscreened are where Toronto needed big stops from McElhinney that they didn’t get. The veteran admitted after the game he was disappointed not to have made one of the stops on Ovechkin’s first two goals and felt responsible for having put his team behind the eight ball. Barring a change to Babcock’s usual goaltending schedule, where McElhinney only plays on back-to-backs, he’ll have to sit on the defeat until mid-December in Detroit. McElhinney finished with 17 saves and an .850 save percentage, the second time in four starts this season he’s recorded a save percentage below .900.

While much may have changed about the Capitals over the years, Ovechkin’s prolific ability to make teams pay on the power play has rarely wavered. His goal on the man advantage aside, the Leafs penalty kill had a solid night, and was an important part of what kept their hopes of a comeback alive. With two calls going against the Leafs before the 12 minute mark of the second period (and both being loudly disputed by players and fans), the kill was tasked with not letting the Capitals lead extend out of hand. Enter sophomores Zach Hyman and Connor Brown. Hyman had a strong shift playing keep away with the puck behind the Capitals net to run the clock down and Brown did an admirable job taking away shooting lanes from Ovechkin’s one-timer. The kill finished 2-for-3 on the night against a Capitals team with the third-best road power play in the league (27.8 per cent) and has handled 17 of 20 man advantages over their last five games.

The Leafs head out for another extended road trip, starting in Calgary against the Flames on Tuesday. ​