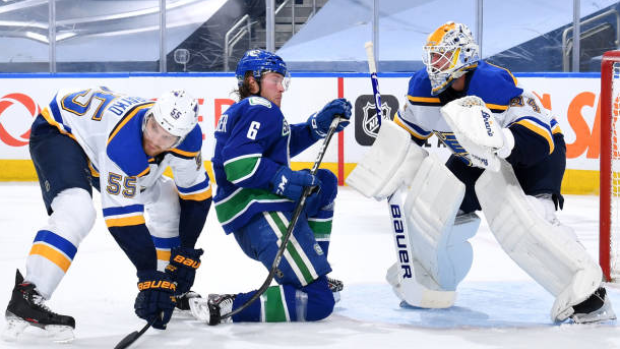 Down 2-0 in their series against the Vancouver Canucks, the St. Louis Blues turned to backup goaltender Jake Allen on Sunday for Game 3 and picked up a much-needed win in overtime.

Allen, who was making his first postseason start since 2017, turned aside 39 of the 41 shots he faced in the 3-2 victory on Sunday.

"[Allen] was excellent," Blues head coach Craig Berube said, per NHL.com. "We hadn't got a win yet so changed it up, and Jake's been a real good goalie for us all year and again he was tonight. He's extremely prepared, works extremely hard. He doesn't take much time off. He's always out there practicing, whether it's on the ice or video. Just staying prepared. He's a real good pro."

The 30-year-old posted a 12-6-3 record during the regular season with a .927 save percentage and a 2.15 goals-against average. He started one game during the seeding round, stopping 37 of 38 shots faced in a shootout loss to the Dallas Stars.

Allen got the call Sunday over starter Jordan Binnington, who is yet to post a win since play began in the Edmonton bubble.

Binnington posted a 30-13-7 record during the regular season with a .912 save percentage and a 2.56 GAA, but has a .862 save percentage and a 4.27 GAA in four starts since the league resumed play earlier this month. The 27-year-old started all 26 playoff games for the Blues last season as the team won their first Stanley Cup in franchise history.

It's unclear who the Blues will turn to with a short turnaround ahead of Game 4 on Monday night.