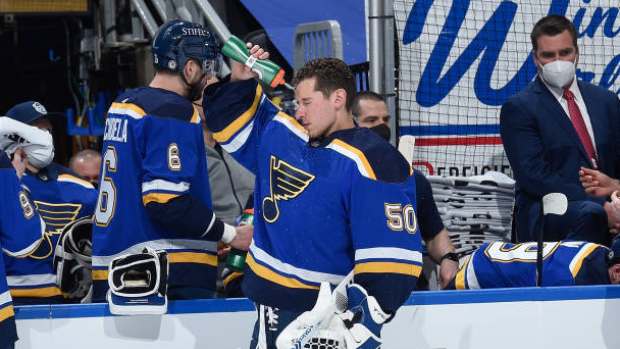 With Jordan Binnington struggling, the skidding St. Louis Blues will turn to Ville Husso for a second straight start on Monday against the Vegas Golden Knights.

Blues head coach Craig Berube, whose team is in the midst of a six-game slide, said the 27-year-old Binnington needs to rediscover his "swagger."

"It's a question that's hard to answer," Berube said Monday. "I think only the player really knows that inside of him. Binner has just got to be himself. He's got to be an aggressive goalie and an aggressive mindset like he had before.

"The swagger in Jordan and what he brings there, that's what makes him in a real good goalie. He's got to find that again."

Berube on Binnington cont'd: "The swagger in Jordan and what he brings there, that's what makes him in a real good goalie. He's got to find that again." (1/2)

Binnington has just one win in his past nine starts dating back to March 6. His record for the season sits at 10-11-5 with a .904 save percentage and a 2.79 goals-against average. His struggles have come immediately after signing a six-year, $36 million contract extension on March 11.

Husso, who started Saturday's loss to the Colorado Avalanche, has a 6-4-1 record this season with a .891 save percentage and a 3.27 GAA.

Having backstopped the Blues to the Stanley Cup in 2019, the Blues will now count on Binnington to lead them back into playoff spot this season. St. Louis enters Monday's game three points back of the Arizona Coyotes for fourth in the West Division with a game in hand.