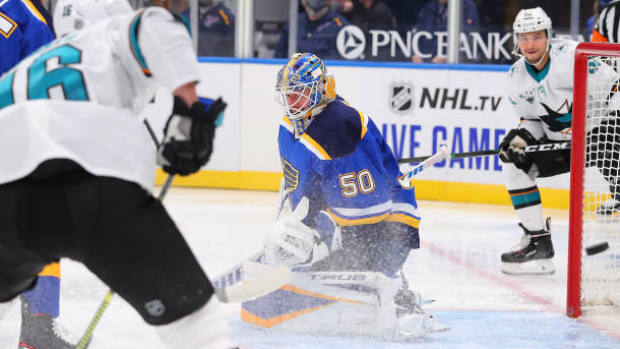 Kane picked up the second of his four minors in the first period when he reached back and slashed Binnington near the waistline while screening the Blues goaltender during a Sharks power play.

Binnington was asked after the game what he did to deserve the slash and replied, "Nothing today."

So Binner, what did you do to deserve that slash from Evander Kane? #stlblues pic.twitter.com/MFbqfDxDkp

Tensions between the two teams appeared to boil over as they met for the second straight game, with a total of 12 minor penalties handed out on the night.

Head coach Craig Berube called his team out for lack discipline after the loss.

"PK killed off seven penalties. I mean two, 5-on-3s," Berube said. "It's ridiculous, the penalties. We can't go to the box that much. It's really hard on people, it's hard on our team.

"[We] can't get to our game because of it. I don't know where we're at in the league penalty-wise, but [we] might be leading the league."

The Sharks and Blues will next meet again on Feb. 18 when they begin another two-game set.