The Vegas Golden Knights took advantage of several other organizations trying to outsmart the expansion draft in 2017, engineering expensive “side deals” to protect certain players. The end result was maximum pain.

Consequently, teams like the Florida Panthers and Anaheim Ducks  provided a blueprint for what to avoid the next time the National Hockey League added a franchise.

Organizations are much more prepared for Seattle’s expansion draft this go-around, but the ongoing pandemic, shortened seasons, and closed arenas have provided a new wrinkle for teams to consider.

Staring down the barrel of a flat salary cap, general managers made bets in spades this past weekend, putting a number of high-profile players (with large contracts to boot) in the exposure pool. That means players like Montreal’s Carey Price, Calgary’s Mark Giordano, and Nashville’s Matt Duchene could be part of the Kraken organization this week.

Seattle, interested in building a long-term contender, will likely pass on most of these names – if not because of the ballooned cap hit, because of other concerns such as injuries, age and opportunity costs.

But there are going to be instances in which the Kraken are faced with a tough decision. One of the most glaring comes via the St. Louis Blues.

The Blues are having a fascinating off-season, flirting with the idea of trading star forward Vladimir Tarasenko prior to the expansion draft – teams were naturally interested, even at his full cap charge.

For some teams, Tarasenko’s $7.5-million dollar per-year cap hit (through 2022-23) is hard to digest. But chilling the waters of a possible trade (and similarly, a shared concern of interested buyers) is Tarasenko’s health. Consequently, the Blues decided to roll the dice, exposing him to Seattle for the upcoming draft.

Now the ball is in Seattle’s court. On one hand, Tarasenko is a proven scorer who has averaged 34 goals per 82 games over the course of his career. On the other hand, he’s a player who has had three shoulder surgeries and there are overarching concerns as to whether he will ever be the same calibre attacker.

Let’s complicate this a little further. The Blues – following a 7-3-1 format when protecting players – opted to retain defencemen Torey Krug, Colton Parayko, and Justin Faulk. That means 24-year-old Vince Dunn, an established top-four blueliner already at this point in his career, is also available to Seattle. Dunn is a restricted free agent with a track record of success, so it is likely his true salary differential from Tarasenko will be muted.

It’s hard for Seattle to go wrong with either player. Consider the contributions of each over their careers – we will use Goals Above Replacement percentiles, position relative, to compare contributions (via EvolvingHockey): 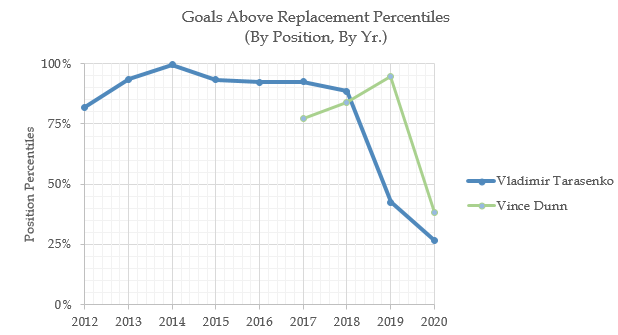 Before Tarasenko’s ugly run of injuries, he was one of the most predictable skaters in the league – a shoo-in for at least 30 goals and consistently outscoring the opposition when on the ice. And though it feels like Tarasenko has been in the league forever, we are still talking about a player just who is 29.

On the other hand: Dunn has emerged as a talented player in his own right, a slick skater who is five years younger than Tarasenko. Dunn is prone to the occasional mistake (particularly off the puck), but it’s impossible to argue results there too: The Blues are 31-goals better than their opponents with Dunn on the ice since 2017-18, a number only bested by the departed Alex Pietrangelo (+38) at the defensive position.

There is an argument to be made for Seattle to engineer a side deal with St. Louis should they be interested, drafting Dunn and acquiring Tarasenko. But this assumes the Blues aren’t gambling themselves – St. Louis may be betting on Seattle to take the defenceman, keeping Tarasenko in St. Louis. Because just as Seattle could rehabilitate Tarasenko and turn him back into a star or trade him for big assets, St. Louis could too. Lost in all of this is most of us guessing on Tarasenko’s medicals, and how much that will weigh on the scale of any trade involving the Russian winger.

The Kraken have a ton of cap flexibility and I suspect we’ll see them draft players merely for the sake of trading them elsewhere, not dissimilar to what the Golden Knights did in 2017.

But St. Louis offers a very interesting gambit. At the heart of it: an elite first-line goal scorer with a nebulous medical situation, an attractive defensive alternative, and the opportunity to trade and acquire more assets, irrespective of which direction they go

It’s a great summer to be Kraken GM Ron Francis!