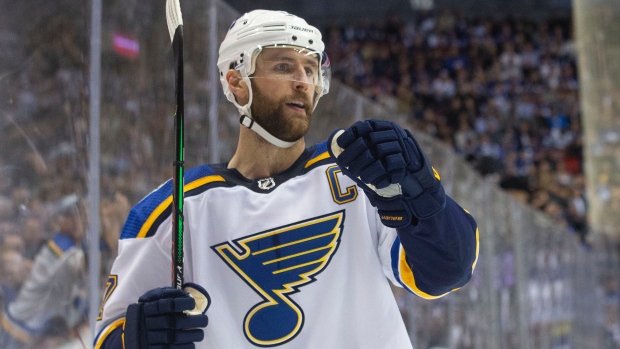 St. Louis Blues general manager Doug Armstrong told TSN Hockey Insider Pierre LeBrun on Tuesday he believes his team is best off not having any player earning superstar money as they look to continue to compete for Stanley Cups.

Armstrong was asked specifically about the future of captain Alex Pietrangelo, who is currently playing out the final year of his contract. While he declined to speak directly on the defenceman, the general manager noted the benefit of the team's current cap structure.

"I don’t want to get into specifics as far as Alex himself," Armstrong told LeBrun in The Athletic. "Our goal is to have a lot of good players. Our organization has been built not on the back of one or two guys. But the collective whole. We believe we have depth up front and depth on the back end. We have a lot of wealthy players but maybe no really rich players? And that’s the way we believe we can stay competitive in this market.

"I look at a team that I view that has been good for a number of years in Boston. They have their top players that have bought into an organizational outlook and quite honestly, we have too. Unless you’re picking at No. 1 or No. 2 and you’re getting a (Connor) McDavid or (Sidney) Crosby or (Alex) Ovechkin or a (Auston) Matthews, it’s difficult to find … you can create in your own mind an $11-million player or a $12-million player, but that might not be it. Some of it is marketing, some of it is real. I just believe that our method of death by a thousand cuts is the way that you build a team if you don’t have that type of (superstar) player."

Vladimir Tarasenko and Ryan O'Reilly are currently the Blues' highest-paid players, carrying cap hits of $7.5 million. Pietrangelo carries a cap hit of $6.5 million, but his future with the franchise was put into question when Armstrong acquired defenceman Justin Faulk from the Carolina Hurricanes last month and signed him to a seven-year, $45.5 million contract - a $6.5 million cap hit.

Pietrangelo, 29, has spent his entire career with the Blues since being selected fourth overall in the 2008 NHL Draft. He confirmed to TSN Radio 1050 Toronto on Tuesday that talks have begun with the Blues on the potential extension, but declined to give further details.

"It's always a cliché answer, right? I'm not going to say much," Pietrangelo told First Up. "I got my representatives, they'll take care of that. I'm here to play hockey (and) worry about my job. That's probably the answer you get every time, but I'm gonna stick with that one."

Pietrangelo on Blues' win over Leafs, playing with Carlo, visit to White House and more

Through three games this season, Pietrangelo has two goals, including the game-winner on Monday against the Toronto Maple Leafs. He had 13 goals and 41 points in 71 games last season, adding three goals and 19 points in 26 playoff games.