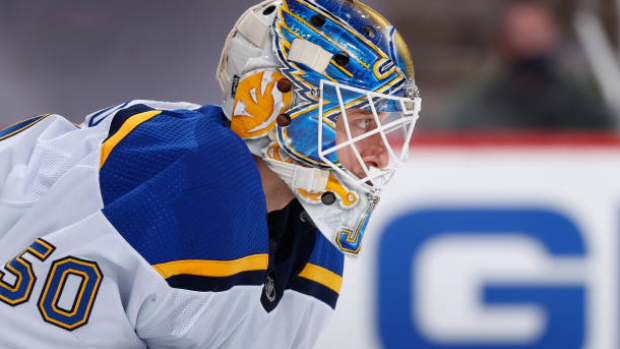 St. Louis Blues goaltender Jordan Binnington is currently playing out the final season of a two-year, $8.8 million contract signed after he backstopped the Blues to their first-ever Stanley Cup in 2019.

The 27-year-old is off to another strong start this season, with a 7-3-2 record with a .918 save percentage and a 2.37 goals-against average. He's started 12 games, compared to just four for backup Ville Husso, and Blues general manager Doug Armstrong told The Athletic the intention is to sign Binnington to an extension.

“Yeah, we try and keep (contract negotiations) behind closed doors,” Armstrong said. “But you know, we drafted him, and he took the long road to get here, but since he’s been here, we’ve had success, and obviously we’re hoping to find a way to keep him here.

“If you look at this age and you look at what he’s accomplished, you know most teams have a No. 1 guy, and we have a No. 1 guy. Certainly, if he’s not here, we’re going to have to go find another partner for Husso. So, our goal is to keep him here, obviously.”

Husso, 26, has a 2-2 record in his first career NHL season with a .875 save percentage and a 3.74 goals-against average. Behind him on the depth chart is 20-year-old Joel Hofer, who has never made an NHL start and is currently on the team's taxi squad.

According to CapFriendly, the Blues are projected to have $22.41 million in cap space for next season with 12 players from their current roster under contract.

“(Binnington) bet on himself, and he’s going to get paid like those guys expect to be paid and will get paid like the guys that have had success,” Armstrong said. “I think around the league, he’s looked at as a good No. 1, and that’s the way we’ll look at him as.”