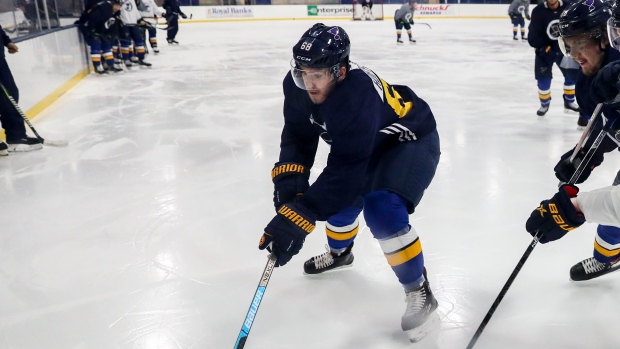 Attending St. Louis Blues camp on a professional tryout, TSN Hockey Insider Pierre LeBrun reports winger Mike Hoffman is expected to extend his stay with the team through the season.

LeBrun said Thursday on Insider Trading Hoffman is expected to sign a one-year deal worth roughly $4 million to $4.25 million before the Blues open their season next week.

"Well, listen, let’s be clear. Mike Hoffman didn’t go to St. Louis really having to try out. I mean, there was a verbal understanding that it would lead to something better, although, nothing is guaranteed," LeBrun said. "But when you saw him rolled out on the first-unit power play this week in training camp, you knew that something was going to play out in a positive sense for Mike Hoffman. And that’s what’s going to happen. He’s going to sign a one-year deal in the neighbourhood of $4 million to $4.25 million I think between now and opening night. The Blues have to do a little salary cap gymnastics. Vladimir Tarasenko will probably go on LTIR closer to opening night. That’ll create some room for Mike Hoffman. But he should be a Blue, all things being equal."

Tarasenko, who underwent shoulder surgery in September, will be re-evaluated in February, general manager Doug Armstrong said last month. The 29-year-old, signed at a $7.5 million cap hit through 2022-23, was limited to just 10 games last season after undergoing an initial shoulder surgery.

The 31-year-old Hoffman scored 29 goals and recorded 59 points in 69 games last season with the Florida Panthers. He scored three goals and five points in the playoff qualifying round as the Panthers were eliminated in four games by the New York Islanders. He is coming off a four-year, $20.75 million contract.