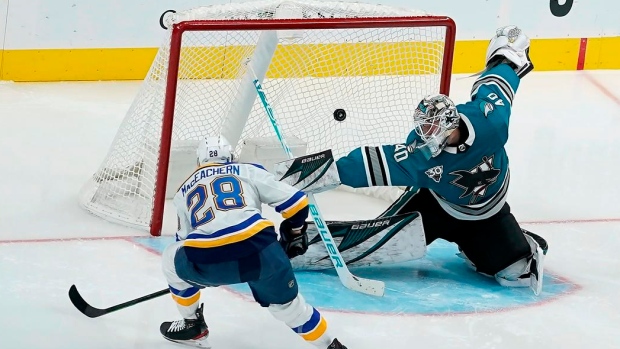 SAN JOSE, Calif. — Marco Scandella scored his second goal of the game to break a tie in the third period and St. Louis rallied to beat the San Jose Sharks 7-6 Saturday night after Blues starting goalie Jordan Binnington lost his cool when getting pulled.

“That was a pretty wild game,” said Zach Sanford, who had a goal and an assist. "We don’t have too many games like that, that’s not how we like to play. But we came out with the win and that’s all that matters at the end of the night.”

Binnington went after three Sharks when he was replaced after allowing his fourth goal on 19 shots. Ville Husso stopped 19 of 21 shots he faced in relief and the Blues got the win after tying the game on Sanford’s goal late in the second and then three more in the first 7:14 of a back-and-forth third period.

Mackenzie MacEachern scored a short-handed goal, Ryan O’Reilly added another and Scandella took a pass from Oskar Sundqvist to make it 7-6 midway through the third.

Evander Kane and Timo Meier each scored twice and Logan Couture and Kevin Labanc added goals in the Sharks' first game back after having one game postponed because of Tomas Hertl’s positive test for the coronavirus. Devan Dubnyk allowed seven goals on 30 shots.

“We gave up 13 chances and seven ended up in the back of the net," coach Bob Boughner said. "You’re not going to win many games like that.”

Sammy Blais and Brayden Schenn also scored for the Blues, who had lost three straight.

Despite the barrage of goals, the most memorable moment of the game might have come when Binnington lost his composure after allowing Kane’s second goal of the game.

While skating off the ice, Binnington went after three different Sharks players. He shoved Radim Simek by the bench, put his stick in Erik Karlsson’s face near centre ice and then got into it with Dubnyk before finally leaving the ice.

“I guess he was frustrated,” Dubnyk said. “I don't know why he was skating around pretending to punch guys. I just told him to get off the ice and calm down.”

“He’s a fiery guy,” coach Craig Berube said. “That's kind of the way he is. We've seen that in the past from him. I didn't think a penalty was warranted. He’s trying to rally the team. That's what he's trying to do.”

Husso came on and stopped 13 shots the rest of the second period to keep St. Louis in the game. The Blues tied it late in the second when Sanford skated in from behind the net and beat Dubnyk for their 12th goal in five second periods against San Jose this season.

The Sharks got on the board just 17 seconds into the game when Meier threw a puck toward the net that hit defenceman Torey Krug and bounced past Binnington for a goal.

Each team added another goal in the first with Scandella’s point shot tying the game at 1 before Kane knocked a rebound into an open net on the power play to restore the one-goal lead for San Jose.

Australian Nathan Walker was in the lineup for the Blues after a week in COVID-19 quarantine. Forward Vladimir Tarasenko (upper body) is practicing for St. Louis and could return for the first time this season on the this trip.