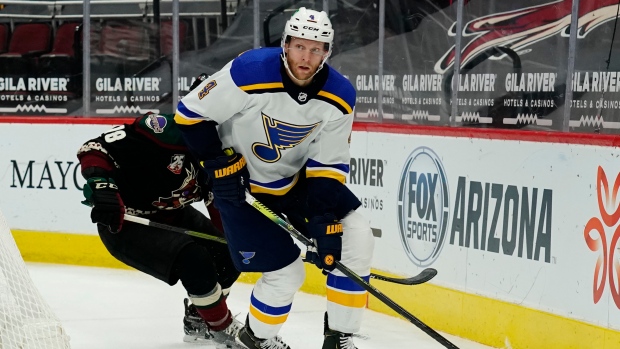 Carl Gunnarsson is hanging up his skates.

The veteran defenceman announced his retirement on Wednesday after 12 NHL seasons in an essay posted to the St. Louis Blues website.

A knee injury limited Gunnarsson to just 12 games this past season with his campaign ending prematurely in February.

"I've never been a star or the best player on any of the teams I've been on, not even as a kid," Gunnarsson wrote. And if you ask anyone who saw me play growing up if they thought I'd one day play in the NHL, I don't think anyone could honestly say yes. Me included. It just seemed so far away."

A native of Orebro, Sweden, the 34-year-old Gunnarsson spent the last seven seasons with the Blues after playing the first five with the Toronto Maple Leafs.

Gunnarsson reflected upon winning the 2019 Stanley Cup with the Blues.

"One of the best times in my life was preceded by a year of struggle," Gunnarsson wrote. "Roughly 14 months before I hoisted the glorious Stanley Cup I had knee surgery going in to the last year of my contract. It was a long road getting back and when I eventually did, I found myself battling yet another injury. I found a way to push through and so did our team that year, going on our unforgettable Cup run.

"To end a year like that - by winning what we all dream of - was beyond my wildest imagination. Crying tears of joy with my wife and with my brother on the ice after Game 7 is something that will never be erased from my memory. And to personally have had an impact with a game-winning goal in Game 2 of the Final will always make me pinch my arm in disbelief."