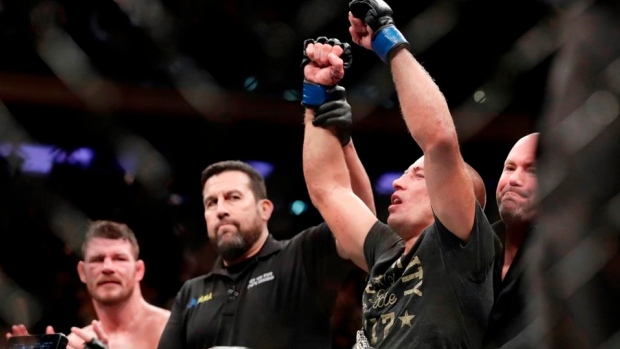 After becoming the fourth UFC fighter to hold belts in more than one division just over one month ago by defeating Michael Bisping at UFC 216 at Madison Square Garden, Canadian Georges St-Pierre is vacating the belt that earned him that piece of history.

The UFC announced on Thursday that St-Pierre has vacated his middleweight title effective immediately.

As a result, interim champion Robert Whittaker has been elevated to the undisputed middleweight title holder.

Whittaker will make his first official title defence on Feb.10 at UFC 221 in Perth, Australia, against former champion, third-ranked Luke Rockhold in the organization’s first event in Western Australia. The five-round fight will be made official pending commission approval, which will be an unlikely hurdle.

St-Pierre released the following statement via the UFC:

“My fight at UFC 217 was one of the greatest nights of my life but I now need to take some time to focus on my health. Out of respect to the athletes and the sport, I don’t want to hold up the division. I will be giving up my belt and once I’m healthy I look forward to working with the UFC to determine what’s next in my career.”